All listings reflect AFSI’s mission to educate the public on the truth about Israel and to advocate for a Whole and Sovereign Israel.

Friday – July 10, 2020 | 1:00pm EDT
Turkey’s Dangerous Ottoman Nostalgia
With Burak Bekdil. The Ottoman Empire ended in 1923, but for neo-Ottomans like Turkey’s President Recep Tayyip Erdoğan, the regime has merely been in a long slumber. From meddling in the Balkans to anti-Zionism to active roles in the Syrian and Libyan civil wars to drilling in Cypriot waters, Erdoğan shows how he longs for 1820 rather than 2020. Burak Bekdil outlines Erdoğan’s neo-Ottoman motivations, the threats it poses, and how to counter it.
Click HERE to join. You can also reply to Stacey Roman or call (215) 546-5406, ext. 113 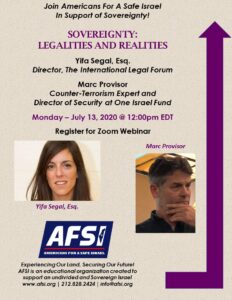 Monday, July 13 @ 12:00pm EDT (note time change)
Sovereignty: Legalities and Realities with Yifa Segal, Esq. and Marc Provisor
Yifa Segal, Esq, Director of The International Legal Forum and Marc Provisor, Counter-Terrorism Expert and Director of Security at One Israel Fund will share their expertise on these two aspects of the Sovereignty debate. Yifa heads a network of over 3,000 attorneys worldwide who fight Israel’s legal battles at every level. Marc assesses security risks to Judea, Samaria and all of Israel using all available resources to promote his cause of “No More Jewish Victims.” Together they will bring you an accurate assessment of the Sovereignty issue from both their unique and highly knowledgeable perspectives. Don’t miss this!! |  Register HERE

Tuesday – July 21, 2020 | 7:30pm EDT
Is the Love Affair Between Jews and the University Over?
With Liel Leibovitz, Tablet Magazine. The university has long had a central place in American Jewish life and Jewish aspiration. Ideological conformity has replaced open inquiry; the high-tech economy has made the credentials of the college increasingly obsolete; and, for Jews, the atmosphere has become toxic for those who don’t feel like hiding their support for Israel or their traditional beliefs.  |  Register HERE

Tuesday, August 4, 2020 | 7:30 PM EDT
Jews Without Apology: Some Lessons from My Years at Harvard
With Ruth Wisse, Harvard University (emeritus) and The Tikvah Fund. The campus culture has inordinately focused on narratives of victimhood. Jews have certainly suffered their share of mistreatment, and anti-Semitism seems to be alive and well. But the only true and enduring recipe for Jewish flourishing—in college and beyond—is Jewish self-confidence: the educated belief that being a Jew and being a Zionist is never a reason to apologize.  |  Register HERE

June 30, 2020
Jerusalem Must Remain the United Capital of the Jewish People
Arieh King, the Deputy Mayor of Jerusalem and Founder of the Israel Land Fund, in a lively conversation. At the vanguard of the movement for Sovereignty in JudeaSamaria and a United Jewish Jerusalem, Arieh has a unique and exciting perspective on the latest from Israel. Video HERE
June 21, 2020
Activism Updates From Israel
Israel activists heard the latest news from Israel. “The Temple Mount: Beyond the Status Quo” with Yaakov Hayman, Director of the Temple Mount Heritage Foundation and “An Israel Insider’s View Right Now” with Aharon Pulver, Executive Director of the Israel Independence Fund. Video HERE

June 3, 2020
The PA’s Exploitation of the Corona Crisis
Naomi Kahn, Director of the International Division of Regavim, sits down with Judy Freedman Kadish, Executive Director of Americans For A Safe Israel for the latest news on Regavim’s work in protecting Israel’s national lands and the return of the rule of law to all areas and aspects of the land and its preservation. Video HERE

February 10, 2020
The Art of Security with Marc Provisor
The merging of art and security is a concept difficult to comprehend but Marc Provisor showed us how he does it. A counter terror security consultant and an artist living and working in Israel, he lectures and consults extensively regarding Israel’s security, terrorism, and the continuing challenges facing the Middle East and Western society.

December 4, 2019
AFSI Hosts A Special Evening With Im Tirtzu
Im Tirtzu’s CEO Matan Peleg and Chairman of the Board Doug Altabef on “From Jerusalem to New York: How BDS in Israel Impacts BDS in the US.”

January 28, 2019
Americans For A Safe Israel/AFSI Hosts Regavim for a Special Evening Celebrating the Connection of the Jewish People to the Land of Israel
Regavim is an Israeli NGO dedicated to protecting Israel’s most precious resources and preserving Israeli sovereignty. An in-depth look at the issues shaping Israel’s future.

March 13, 2018
AFSI Philadelphia is proud to sponsor Marc Prowisor “Beyond the Headlines…Behind the Scenes: An Insider View on the Security Situation on the Ground in Israel.” Mark is a security expert from Israel’s Shilo Region who speaks throughout the US. His primary focus is on the strategic and biblicaly significant Judea and Samaria regions that have been a hotbed of terrorist acts of violence against Jews.

February 19, 2018
AFSI protest demonstration against Mahmoud Abbas’ presence in the US, in NY, and his February 20 address to the UN Security Council.

February 14, 2018
AFSI’s Israel at 70 Lecture Series proudly sponsored Aharon Pulver, Executive Director of the Israel Independence Fund who spoke on “Thinking Out of the Box on Israel.” Followed by discussion of the burgeoning wine vineyards in Judea and Samaria and a tasting of wine samples