Saffie Rose Roussos, 8 years old. One of the victims of the latest Islamic terror attack.

Our hearts and prayers are with the survivors and the families of those heinously murdered by Islamic terrorists in Manchester, England yesterday.

May the scourge of Islamic terrorism be eradicated speedily from the face of the earth.

Monday evening at the Dan Boutique Hotel, the group ran into good friend and tremendous activist and supporter of Israel, Ryan Bellerose.

The group attended the Moskowitz Awards, this year’s recipient being Moshe Arens. At this convention of Zionist activists, the atmosphere was festive, with videos, speeches and tons of rock music by popular bands and singers, to which the youthful crowd was on its feet singing, dancing and swaying to the music.

Great music at the Moskowitz Awards

Today (Tuesday), several members of the AFSI Chizuk Mission ascended the Temple Mount. Rabbi Chaim Richman, who has guided AFSI groups innumerable times, once again led the way on a halachic tour of the holy site. As usual, Temple Mount police shadowed the group throughout their tour.

On the Temple Mount;

The entire group then drove to the Atarot area of northern Yerushalayim, a largely Arab area. People were shocked at the huge amount of Arab construction there. Plans for a large Jewish community are in the works for this area. Good friend of AFSI, Jerusalem Councilman and head of the Israel Land Fund, Arieh King, guided the group there.

They then visited the Levi Eshkol museum in the Rechavia neighborhood of Jerusalem. This newly opened home served as the official residence of Prime Ministers David Ben-Gurion, Levi Eshkol, and Golda Meir between 1950-1974. Professor Medzini from Hebrew University gave an extremely interesting talk, as he was a personal friend of PM Eshkol.

A few pictures of the museum 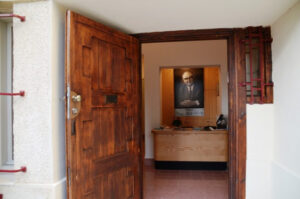 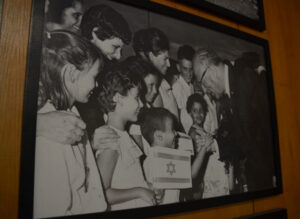 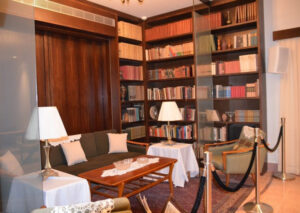 They then participated in the Temple Mount Sifting Project, which is under the auspices of Bar-Ilan University. The sifting is funded and operated by the Ir-David Foundation with the cooperation of the Israel National Parks Authority, and the research and publication of the finds is funded by private donors through the Israel Archaeology Foundation.

Here, individuals go through the remains of what the Arabs removed from the Temple Mount and threw into the Kidron Valley. This program has been responsible for salvaging priceless artifacts treated like garbage by the Arabs.

Tuesday evening promises to be full of Yom Yerushalayim activities.

Yom Yerushalayim – 50th Anniversary of the Reunification of Jerusalem

The following is an abridged version of a Yom Yerushalayim message from Rabbi Gideon Shloush, Rabbi of NYC’s Congregation Adereth El, and the Executive Vice President of the Religious Zionists of America (RZA), on the 50th anniversary of the reunification of Jerusalem.

Greetings from Jerusalem! Here there is euphoria in the air. Not only because President Trump is here and it’s the first time a sitting President of the United States paid a visit to the Kotel. But truly, the city is humming because tomorrow, Wednesday June 24th (28 Iyar 5777) Jews around the world will be celebrating the 50th anniversary of the reunification of Jerusalem.

On Sunday night tens of thousands of people were gathered outside the Old City walls – facing the Tower of David – to witness the historic opening ceremony of Yom Yerushalayim 50. Click on the image below for a short video of the ceremony

Prime Minister Netanyahu, President Ruby Rivlin and new US Ambassador David Friedman were all in attendance. The ceremony included an unprecedented sound & light show projected onto the Old City walls. But what was most remarkable about this show was that it told the story of the Jewish People. It reminded us that our history in this location dates back, not 50 years, but 3800 years. We saw images of Akeidat Yitzchak, Jacob’s ladder, King David, prophets and centuries of Jewish presence in Jerusalem.

In the days ahead we look forward to more celebrations and opportunities to express our Hakarat HaTov for this incredible gift of a United Yerushalayim. It’s hard to believe that just 50 years ago, a barbed wire fence divided the city of Jerusalem and that sniper fire was part of life in Jerusalem.

2000 years ago the Jewish People were exiled en masse from our beloved city and homeland. Since that time, in every corner of the world, Jews recited, mournfully, the immortal words “Im Eshkachech Yerushalayim Tishkach Yemini.”  Rabbi Sacks said “In all of history, no People ever loved a city like the Jewish People loved Jerusalem. We are the People that never stopped dreaming.”

Yerushalayim is our core. It is our center. It is our Neshama. It is the air we breathe. We have an unbreakable bond with Jerusalem; a bond that has lasted for thousands of years. Jerusalem is in the heart of every Jew.

On this Jubilee anniversary of the Six Day War, please be encouraged to not let this day go by idly. Why not attend an event in celebration of this historic milestone? At the very least, go to Shul and sing Hallel. Say it slowly and with a full-heart. Utter the words written by your great-grandfather King David as he sat in his royal palace three thousand years ago in Jerusalem. Thank G-d for the gift Am Yisrael has been given and pray that we should merit to see this blessing continue until the arrival of the Mashiach.