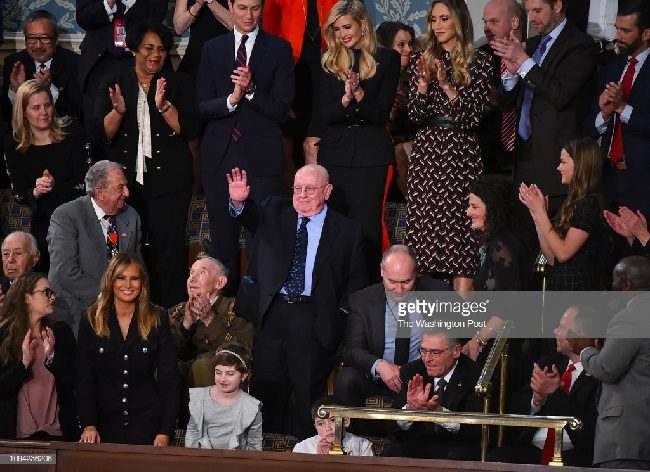 “We will not avert our eyes from a regime that chants death to America and threatens genocide against the Jewish people. We must never ignore the vile poison of anti-Semitism, or those who spread its venomous creed. With one voice, we must confront this hatred anywhere and everywhere it occurs.” ~~ President Donald J. Trump in his State of the Union address on February 5, 2019.

Pictured here is Judah Samet, a fitting guest at Tuesday night’s speech. Samet is a Holocaust Survivor and a survivor of the Tree of Life Synagogue massacre in Pennsylvania. Samet received a standing ovation after he was acknowledged by President Trump.

President Trump announced this week his appointment of Elan Carr as the US State Department’s Special Envoy to Monitor and Combat Anti-Semitism. Carr’s background is quite impressive, especially his history of leadership in working to fight anti-Semitism on college campuses. We think he is highly qualified to fill this very critical position. Read about Carr’s extensive background in The Times of Israel report HERE.

Late Wednesday afternoon, the US Senate approved in a 77-23 vote a bill that codifies $38 billion in defense assistance to Israel and also provides legal cover to states that target the BDS movement.

The “Combating B.D.S. Act.” was co-written by Senators Marco Rubio and Joe Manchin. While the bill was waiting on the Senate floor for a vote, Senator Rubio’s Opinion in The New York Times, “The Truth About B.D.S. and the Lies About My Bill” was published. We encourage you to read it.