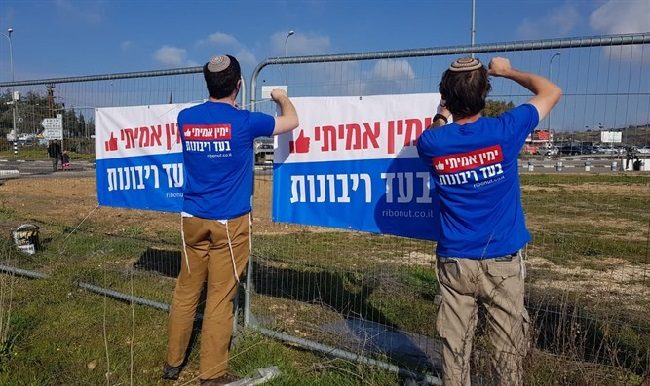 Billboards that read “The true Right supports Sovereignty!” are being put up all over Israel!! This campaign is to encourage voters in Israel’s upcoming elections to support parties committed to the vision of Israeli sovereignty over Judea and Samaria.

Women in Green leaders Yehudit Katzover and Nadia Matar emphasize the campaign is unaffiliated with any specific party and that no political officials on behalf of any party are behind it.

US Congressmen Dr. Andy Harris (R-MD) and Andy Barr (R-KY) visited Oz V’Gaon this week. Katsover and Matar spoke to them about the establishment of the reserve as a Zionist response to the 2014 murder of three teens and especially the importance of applying Israeli sovereignty over Judea and Samaria. Read about what was said HERE.

When the anti-Israel “Combatants for Peace” announced it would protest Israel’s alleged annexation of Area C (Israeli controlled part of Judea and Samaria) the Sovereignty Movement, immediately responded. They mobilized a large group of people to attend a lecture by writer and Knesset candidate Caroline Glick at the Oz veGaon nature reserve in Judea, outside of Gush Etzion, to “prevent the continuing Arab takeover of Area C.”

The Sovereignty Movement is an offshoot of Women in Green, which is headed by Yehudit Katsover and Nadia Matar,