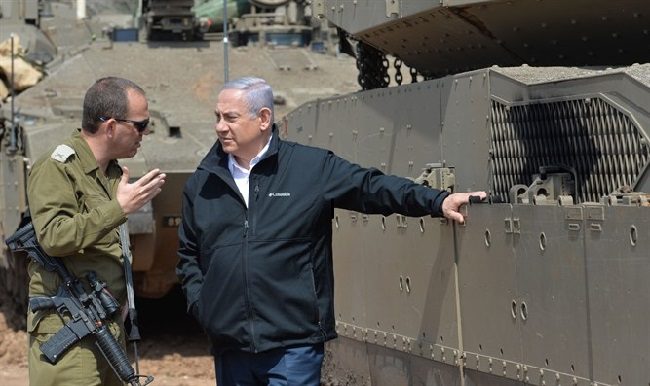 On Tuesday, Prime Minister Netanyahu instructed IDF Chief of Staff Aviv Kochavi to send additional forces to the southern command. On his visit to the Gaza border today, Netanyahu ordered reinforcement of units in preparation for what could become an “extensive ” campaign.

An IDF official reported that over a 24 hour period 60 rockets were fired at Israel from Gaza on Monday. Israel’s response was swift and hard hitting. Among those Israel pounded heavily throughout the night: Hamas and Islamic Jihad military compounds in the northern Gaza Strip, offices of Hamas senior political leader Ismail Haniyeh, a building housing the organization’s general and military intelligence headquarters, and internal security offices.

Prime Minister Netanyahu, who cut short his visit to the US, said, “We gave a very, very powerful response, and Hamas needs to know that we shall not hesitate to take all steps required.”

Hamas carried out its threat to increase launches of incendiary balloons into Israel.

While Israel’s enemies keep attacking her, what have they really accomplished for their own interests? Nothing that we can see. In reality, they keep losing and Sderot Mayor Alon Davidi told them so in an open letter.

Why did this week’s rocket attacks on Israel happen? Hamas’ problems at home could be to blame, as Khaled Abu Toameh discusses in his Jerusalem Post Opinion.