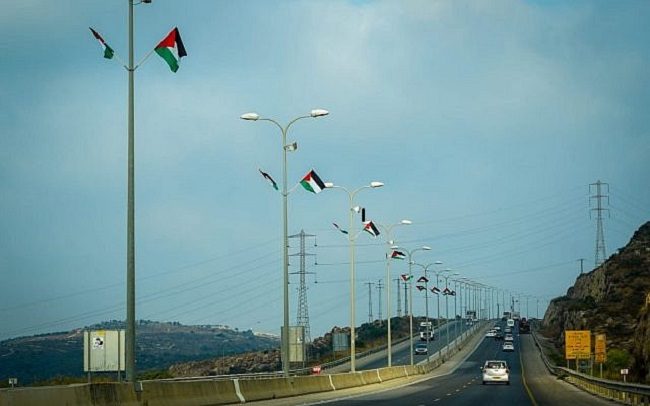 Thousands of Judea and Samaria residents woke up on Sunday morning only to discover that central junctions throughout Judea and Samaria were decorated with PLO flags. The flags, hung on highway light poles in a manner befitting the visit of a foreign dignitary, generated hundreds of angry calls to municipal councils in the area from residents who were certain this had been the doing of the gang from Ramallah.

In a startling twist, residents quickly learned that Israel’s NGO Regavim was responsible for this secret overnight operation as part of their wakeup-call campaign “Terror State Around the Corner.”

AFSI applauds Regavim’s latest campaign. Regavim has worked diligently for years to wake up the administration and the people to the Arab land grabs. We hope this latest use of shocking street theater will get people to pay attention to this very dangerous situation.

‘Illegal Arab town must not be allowed inside Shilo bloc.’ Minister calls for crackdown on illegal construction, as work progresses on new Arab town. ‘We ignore too much illegal Arab construction.’