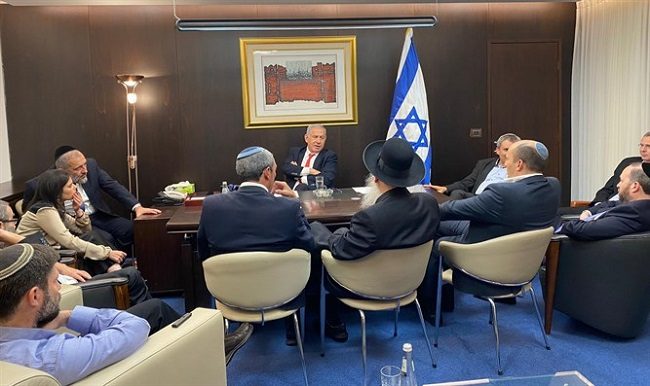 Prime Minister Binyamin Netanyahu addressed a gathering of hundreds of Likud activists gathered at the Tel Aviv Expo Center Sunday night for an ‘emergency conference’ called to protest the possible establishment of a left-wing government without majority backing in the Knesset.

“We are at a crucial moment for the State of Israel. The leaders of Blue and White – Benny Gantz, Gabi Ashkenazi, and Boogie Yaalon – have decided to form a minority government that will be dependent on members of the Joint Arab List,” Netanyahu claimed.

Did Gantz forget who struck Israel for nearly three straight days last week with an endless barrage of rocket attacks?

Where was Gantz on Saturday morning when two more rockets were launched into Beersheva post ‘ceasefire.’ Did he not hear about this?

Blue and White leader Benny Gantz’s latest attempt to form a coalition is not only outrageous – it puts Israel in grave danger. Allowing terrorist supporters into any part of the Israeli government is unacceptable! Gantz has clearly forgotten his roots as an IDF leader. HE IS OUT OF HIS MIND.

We fail to see where Gantz has the security and safety of Israel in mind, hence, AFSI labels him the enemy from within.