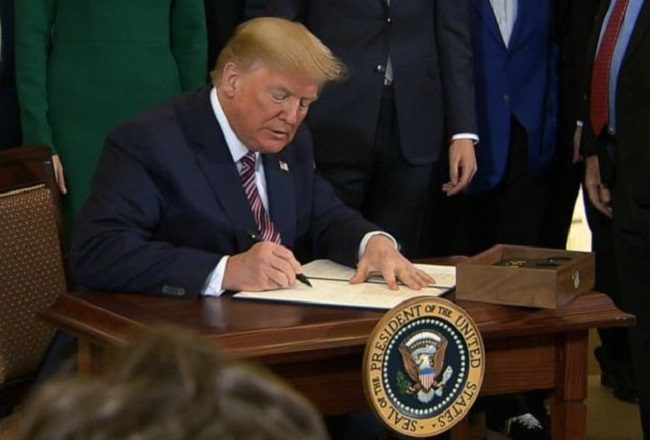 “The vile, hate-filled poison of anti-Semitism must be condemned and confronted everywhere and anywhere it appears.” ~President Donald J. Trump

President Trump signed an Executive Order on Wednesday that calls on government departments enforcing Title VI of the Civil Rights Act of 1964 to adopt the International Holocaust Remembrance Alliance (IHRA) definition of anti-Semitism.

The order is targeted at federally funded universities and colleges. It will require the Department of Education, when reviewing whether there has been a violation of Title VI of the Civil Rights Act of 1964, to consider the widely accepted definition of anti-Semitism as part of its assessment of whether an incident or activity may be anti-Semitic.

The IHRA defines anti-Semitism as “a certain perception of Jews, which may be expressed as hatred toward Jews. Rhetorical and physical manifestations of anti-Semitism are directed toward Jewish or non-Jewish individuals and/or their property, toward Jewish community institutions and religious facilities…Manifestations might include the targeting of the State of Israel, conceived as a Jewish collectivity. However, criticism of Israel similar to that leveled against any other country cannot be regarded as anti-Semitic.”

With this official directive now in effect, it makes it very clear that anti-Semitism will not be tolerated. AFSI welcomes much stronger protection for Jewish students on American college campuses. With the disturbing rise of discrimination, intimidation and harassment against Jews, we trust there will be a significant shift in the anti-Semitic narratives hurled at Israel as well. It is our hope that the dual standards and false narratives that target Israel will now be considered anti-Semitic. Lastly, we would like to see the many members of Congress held accountable for shamefully including anti-Semitism in their politics.