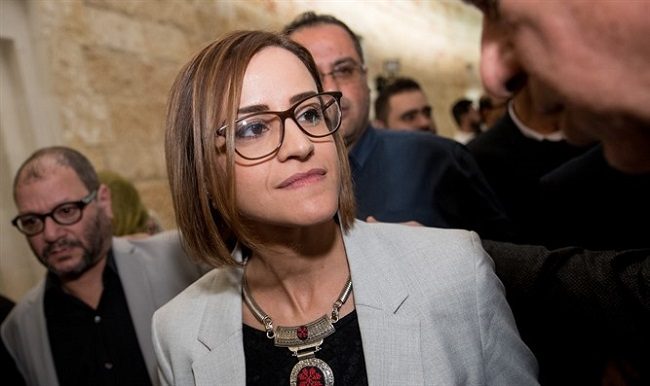 Don’t recognize the photo shown here? It’s MK Heba Yazbak of the Joint Arab List. Here’s what we know about her:

Past Arabic interviews given by Yazbak reveal her battle against Zionism and ambition to eliminate Zionism and the State of Israel’s Jewish and Zionist character.

Said Yazbak about the Joint Arab List, “This plan opposes and fights the country’s Zionism and prides itself of divesting the country of its Jewish and Zionist existence, and at the same time preserves our national identity, without sacrificing full citizenship…”

Yazbak has praised terrorists who murdered Israelis, including expressing regret over the elimination of terrorist Samir Kuntar, who smashed the skull of 4 year-old Einat Haran in the 1979 Nahariya terror attack, and whom she called a “hero.”

WAKE UP! Unfamiliar photos and names along with exposing their documented hatred of Israel could be the norm in AFSI newsletters if Gantz formed a government. Unfortunately, a small segment of the Israeli people, and IDF leaders who fought vigorously to defend Israel and the right for Jews to live in freedom and security, sided with Gantz. We pray that this segment of Israelis will come to their senses and understand the real danger that lies ahead if Gantz were to succeed.