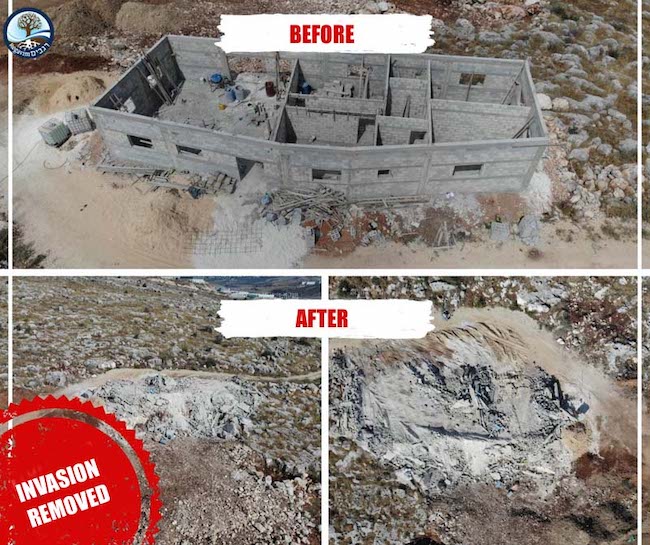 After months of legal proceedings, an illegal Arab structure that invaded state lands in Samaria and threatened the integrity of the Khirbat Kurqush archaeological site was demolished on Wednesday.

The Regavim movement sharply criticized the Coordinator of Government Activities in the Territories, which acted to enforce the law at the site only in response to a petition to the High Court and a series of warnings received throughout the construction process of the illegal Arab structure.

The building in question was part of an ongoing invasion carried out from the area of ​​the village of Bruqin, located within the Palestinian Authority, towards the industrial area of ​​the city of Ariel, which is in Area C, under full Israeli control. The takeover area is legally defined as survey lands, which are state lands in Area C whose registration has not yet been completed.

“We welcome the enforcement of the law, but we fail to understand why the Civil Administration only woke up after being reprimanded and fined by the High Court following the petition we filed in the matter,” said Regavim attorneys Avi Segal and Yael Sinmon. “The whole purpose of the order for the removal of new structures is to allow for immediate enforcement within a few days, and here it lasted so many long months. The Civil Administration is trying to shake off public criticism of its inefficiency, but if in this case it acted so slowly, it’s no wonder that it fails systemically in its role of preserving the open spaces in Judea and Samaria,” the attorneys said.

Yossi Dagan, head of the Samaria Regional Council, noted that “the protection of the historical treasures of this country is our duty, and the repeated attempts of the barbaric Palestinian Authority to damage historic assets—not only of the State of Israel but of all mankind—must be stopped. The government, with all its offices, must do its part in this regard.”