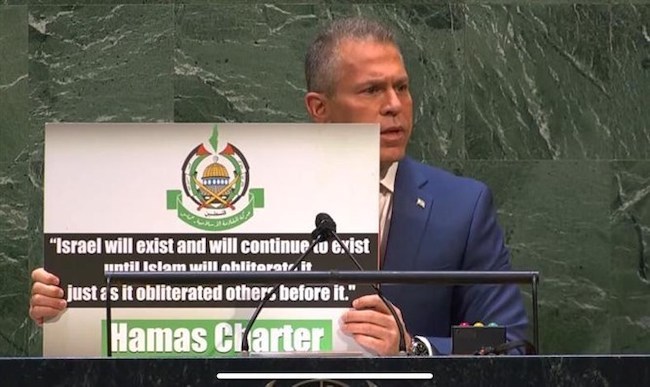 Israel’s Ambassador to the United States and the United Nations, Gilad Erdan, addressed the General Assembly on Tuesday after the adoption of the UN’s biennial Global Counterterrorism Strategy. He said, “For Israel, the adoption of the GCTS is, unfortunately, not a theoretical or academic exercise. During the weeks we sat here debating this resolution, Israeli civilians from our capital in Jerusalem to Tel Aviv and Ashkelon, sat in bomb shelters because of Hamas’s relentless terror attacks.”

Following many diplomatic efforts by Ambassador Erdan and the Permanent Mission of Israel to the United Nations, the resolution determining the UN’s strategy to combat terrorism included a number of important items that are significant achievements for Israel. At Israel’s request, and only one month after Operation Guardian of the Walls, the UN condemned the use of human shields by terrorist organizations, a well-known method of operation by Hamas and Hezbollah.

In addition, the UN condemned, for the first time, anti-Semitic terrorism and recognized its existence. This important and significant decision comes against the backdrop of the current wave of global anti-Semitism.

The UN resolution also condemned the use of the Internet as a tool to encourage and recruit terrorist operatives and called on Internet companies to take responsibility for misuses of the technology. This is a goal Ambassador Erdan has worked for since his time as Israel’s Minister of Public Security and in the international arena at the UN.

Despite the fact that this recognition by the UN is long overdue, AFSI applauds the step they have taken. It’s a positive step in combating Jew/Israel hatred within the walls of the UN and we will be watching to see how this progresses. We also thank and congratulate Ambassador Erdan for his tireless work on behalf of Israel. Yasher Koach!!