All listings reflect AFSI’s mission to educate the public on the truth about Israel and to advocate for a Whole and Sovereign Israel.

Sunday – December 13, 2020 (Program held in Israel)
Youth Seminar Explaining Sovereignty
In memory of Helen Freedman Whose Entire Life Was Devoted to the Land of Israel 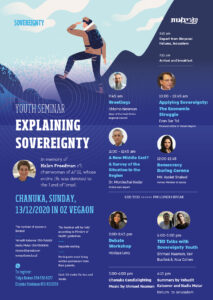 8:15am Departure from Binyanei Ha’auma, Jerusalem, Israel. Program is held in Oz veGaon.

Dr. Mordechai Kedar and MK Ayelet Shaked are among the many featured speakers. See the flyer for the day’s complete program.

Number of spaces is limited!

Sunday – December 13, 2020 | 5:30pm – Candle lighting @ 6:00pm (Live, in person)
14th Annual Chanukah in the Park
Join KJ Beginners and Chabad of the Upper East Side as we spread the light and warmth of the festival with live music, Chanukah treats, holiday spirit and fun for the whole family.
Carl Schurz Park, East 86th Entrance in New York City

Sovereignty – What Are We Waiting For? | November 17, 2020
A timely discussion about Sovereignty with Co-Chairs of the Women in Green, Nadia Matar and Yehudit Katsover. Video HERE

Israel’s Sovereignty Entitlements Under International Law in Respect to Jerusalem and the Disputed Territories | September 30, 2020
With Dr. Jacques Gauthier an international jurist, scholar and human rights advocate. Dr. Gauthier’s highlighted the nexus between the historical facts and events which support the legitimacy of Israel’s sovereignty claims to all of Jerusalem and the disputed territories. | Video HERE

How Judicial Activism in Israel Endangers Sovereignty in Judea and Samaria | September 9, 2020
With Simcha Rothman and Preface by Daniel Seaman. Meshilut, The Movement for Governability and Democracy, was founded with the purpose of strengthening the rule of Israel’s elected officials by restoring the balance between the judicial and legislative branches of government. Video HERE

The Politics of Sovereignty | August 11, 2020
With Likud Minister of Knesset Ariel Kallner. MK Kallner’s top priority is the issue of Sovereignty throughout the entire land of Israel.  Video HERE

Can Israel Win the Propaganda War | July 20, 2020
Theory and Practice: A Conversation with Dr. Ron Schleifer and Ezri Tubi
Dr. Ron Schleifer is Professor and Senior Lecturer at the School of Communications at Ariel University and a specialist in psychological/information warfare. Ezri Tubi is the Founder of the YouTube Channel “Boomerang: Fighting for Israel.” AFSI is fortunate to have had Dr. Schleifer share his wisdom with us on some of our Chizuk Mission trips to Israel. Similarly, our trip participants have also spent time in Ariel with Ezri, the one-man Hasbara machine. Video HERE

Sovereignty: Legalities and Realities | July 13, 2020
Yifa Segal, Esq, Director of The International Legal Forum and Marc Provisor, Counter-Terrorism Expert and Director of Security at One Israel Fund share their expertise on these two aspects of the Sovereignty debate. Together they bring an accurate assessment of the Sovereignty issue from both their unique and highly knowledgeable perspectives.  To accompany the meeting, download a copy of The International Legal Forum’s “Controversial Lands: 8 Burning Questions about Israel and the Territories.” and visit their website for more information. Video HERE

Jerusalem Must Remain the United Capital of the Jewish People | June 30, 2020
Arieh King, the Deputy Mayor of Jerusalem and Founder of the Israel Land Fund, in a lively conversation. At the vanguard of the movement for Sovereignty in JudeaSamaria and a United Jewish Jerusalem, Arieh has a unique and exciting perspective on the latest from Israel. Video HERE
Activism Updates From Israel | June 21, 2020
Israel activists heard the latest news from Israel. “The Temple Mount: Beyond the Status Quo” with Yaakov Hayman, Director of the Temple Mount Heritage Foundation and “An Israel Insider’s View Right Now” with Aharon Pulver, Executive Director of the Israel Independence Fund. Video HERE

The PA’s Exploitation of the Corona Crisis | June 3, 2020
Naomi Kahn, Director of the International Division of Regavim, sits down with Judy Freedman Kadish, Executive Director of Americans For A Safe Israel for the latest news on Regavim’s work in protecting Israel’s national lands and the return of the rule of law to all areas and aspects of the land and its preservation. Video HERE

The Art of Security with Marc Provisor | February 10, 2020
The merging of art and security is a concept difficult to comprehend but Marc Provisor showed us how he does it. A counter terror security consultant and an artist living and working in Israel, he lectures and consults extensively regarding Israel’s security, terrorism, and the continuing challenges facing the Middle East and Western society.

December 4, 2019
AFSI Hosts A Special Evening With Im Tirtzu
Im Tirtzu’s CEO Matan Peleg and Chairman of the Board Doug Altabef on “From Jerusalem to New York: How BDS in Israel Impacts BDS in the US.”

January 28, 2019
Americans For A Safe Israel/AFSI Hosts Regavim for a Special Evening Celebrating the Connection of the Jewish People to the Land of Israel
Regavim is an Israeli NGO dedicated to protecting Israel’s most precious resources and preserving Israeli sovereignty. An in-depth look at the issues shaping Israel’s future.

March 13, 2018
AFSI Philadelphia is proud to sponsor Marc Prowisor “Beyond the Headlines…Behind the Scenes: An Insider View on the Security Situation on the Ground in Israel.” Mark is a security expert from Israel’s Shilo Region who speaks throughout the US. His primary focus is on the strategic and biblicaly significant Judea and Samaria regions that have been a hotbed of terrorist acts of violence against Jews.

February 19, 2018
AFSI protest demonstration against Mahmoud Abbas’ presence in the US, in NY, and his February 20 address to the UN Security Council.

February 14, 2018
AFSI’s Israel at 70 Lecture Series proudly sponsored Aharon Pulver, Executive Director of the Israel Independence Fund who spoke on “Thinking Out of the Box on Israel.” Followed by discussion of the burgeoning wine vineyards in Judea and Samaria and a tasting of wine samples