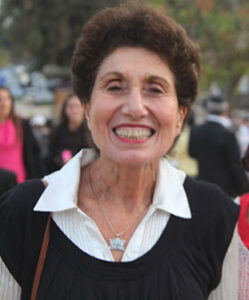 Helen became Executive Director of Americans for a Safe Israel/AFSI in 1995. She served in that capacity until December 2005 and resumed the position in 2009. She continued as AFSI’s Co-Executive Director, along with Judy Freedman Kadish, serving as a spokeswoman for the organization at innumerable meetings, press conferences, radio, and TV interviews. Helen assisted in planning and leading the semi-annual AFSI Chizuk missions to Israel which have been conducted for the past 22 years. She also assisted in planning and participating  in programs and demonstrations related to a safe Israel – and America.

Helen was selected as one of the Forward 50 by the Forward newspaper for efforts to prevent the expulsion of the Gush Katif community in 2005. The connection she and AFSI had/have to the former Gush Katif residents continues to this day. She wass committed to working with American and Israeli lawmakers, in Washington, DC and Jerusalem on issues affecting Israel and America. She also kept in close contact with good friends developed in the many Israeli communities visited by AFSI on the Chizuk missions.

She was especially pleased that her daughter, Judy Freedman Kadish, served with her as AFSI’s Co-Executive Director.

In addition to her beloved Charlie Bernhaut, Helen leaves behind four children and a number of grandchildren, all of whom share her devotion to Israel.

We will miss Helen will leading a demonstration, speaking up and calling it out – as only Helen could and did for so many years in the fight for the truth about Israel and the Jewish people. May her memory be a blessing for us all.