Credited with thinking “outside the box”, Pulver identified the “box” as philanthropy, with much of Jewish charity going to seditious funds like the New Israel Fund. Aharon spoke about the migrant situation in south Tel Aviv to which the IIF began directing resources over 5 years ago, funding crusader May Golan. He also spoke about Ad Kan, made up of former members of Israel Security Services, which is outing evil groups working to destroy Israel. Civil rights for Jews on the Temple Mount is another issue strongly supported by IIF. To clarify the problems on the Temple Mount, Aharon introduced Simcha Rothman, a brilliant attorney who has created Meshilut.

Rothman’s organization was founded in January, 2013 in order to strengthen the rule of Israel’s elected officials by restoring the proper balance between the legal and executive branches of government. Israel’s Supreme Court is the major culprit because its 15 members are self perpetuating and self appointing. Dealing with about 15,000 cases each year, with less than half pertaining to Jewish Israeli citizens and about 59% addressing PA and NGO issues, the Court has consistently displayed its bias against the Jews while siding with the Arabs and Israel’s would-be destroyers. 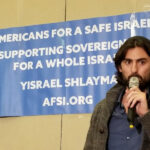 The most egregious power the Court gives itself is the ability to cancel and override the law of the Knesset. In the matter of the demolition of Jewish communities, like the upcoming plans to destroy Netiv Avot, the fact that the citizens of Israel, the Knesset, and the Prime Minister oppose the demolitions is second to the ruling of the Court, which reigns supreme. This is an outrage which MUST be corrected. Israel’s present Justice Minister Ayelet Shaked is trying to address these issues and is making small progress. A huge overhaul of Israel’s Supreme Court is a MUST!!

The evening concluded with a delightful presentation by Zvi Lauren, representing Heart of Israel wines. Zvi gave an animated talk about the wineries in the heartland of Israel providing substantial proof of Israel’s ancient claim to the biblical heartland. A variety of wines were available for tasting, from Har Bracha, Shilo, Rechelim, Hebron, and more.

Wednesday, March 21, will be the date for the continuation of the ISRAEL AT 70 series. Again, it will be open free to the public and will feature excellent speaker(s). Stay tuned.