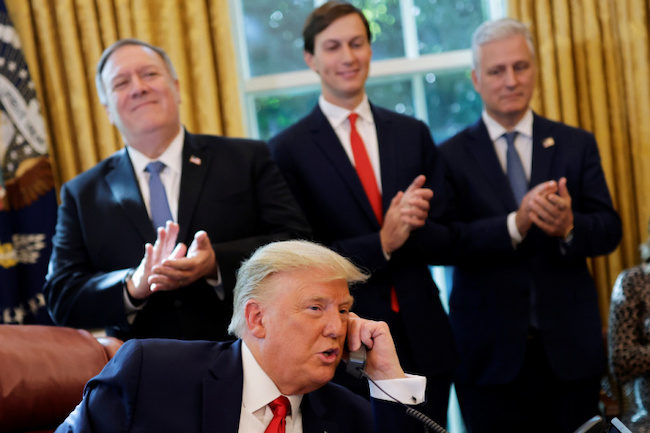 On October 23, the US, Israel, and Sudan issued a joint statement on the normalization of relations between Khartoum and Jerusalem. This step follows the peace agreements between Israel and the UAE and Bahrain and helps cement the nascent regional axis that features Israel as a highly prized ally rather than a vilified enemy.

Sudan is the third Arab country to make peace with Israel in the past two months.

Time will tell to what extent this step will help the provisional Sudanese government overcome its own internal differences and reach the 2022 elections as a functioning and effective body.

Soon to follow? A normalization agreement between Israel and Saudi Arabia is rumored to also be in the works, a diplomatic official said Thursday night. “The Saudis will soon ‘come out of the closet,'” the official said. If this comes to fruition, it will be a significant game changer in the Middle East.

AFSI applauds President Donald Trump for his ongoing efforts to broker normalization between Israel and its too many hostile enemies. These new peace deals are rapidly redefining the Middle East paradigm. We look forward to future relationships with Arab nations that will represent diplomacy, cooperation and a full rejection of the anti-Israel delegitimization agenda that has been the norm for much too long.

Report: As Sudan poised to normalize ties with Israel, Saudis warming up to idea, by Ariel Kahana. Israel Hayom, October 23, 2020