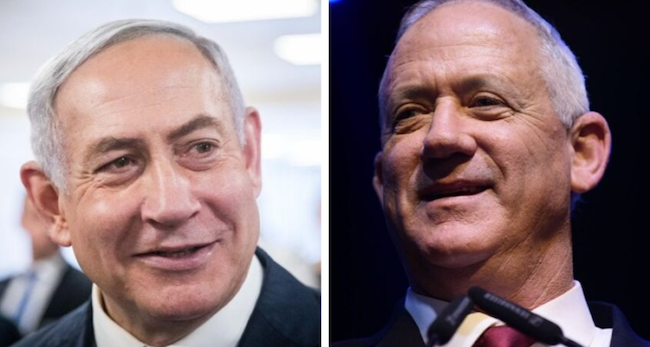 Benny Gantz Elected Speaker, Joins Netanyahu. Blue and White Party Disintegrates
Former Blue and White chairman Benny Gantz has joined with Likud and has been elected Speaker of the Knesset. This paved the way for the unity government. He was supported by the right wing bloc. Yesh Atid, Labor and Yisrael Beytenu MKs boycotted the vote which was 74-18 in favor of Gantz. Prime Minister Benjamin Netanyahu will initially serve as Prime Minister in rotation with Gantz.

The factions of Yair Lapid and Moshe Ya’alon submitted their requests to break away from the Blue and White party today in response to party chairman Gantz’s candidacy for the Knesset Speaker position. This broke up Blue and White.

The purpose of the move Gantz initiated in coordination with senior Likud officials was to prevent the disintegration of negotiations to form a unity government. AFSI applauds the formation of a Unity Government. We are regaining hope in the formation of a solid government in Israel that can deal with the pressing issues of the day.

Yuli Edelstein Resigns
ICYMI (In case you missed it): In a bombshell yesterday, Knesset Speaker Yuli Edelstein announced that he was resigning. He chose to quit rather than calling a vote on his own replacement, as ordered by the Israeli Supreme Court in total disregard of the Knesset. This delayed the vote on his position until Monday, allowing time for the Unity negotiations to continue. The Supreme Court was issuing orders to the Knesset on how to govern. This overreaching by the Court was a source of great consternation in Israel and could have been extremely destructive.

Former Speaker of the House, Yuli Edelstein, had this to say: “As someone who has paid a personal price of years in a labor camp for the right to live in the State of Israel, as a Zionist and as the speaker of this house, I won’t allow Israel to descend into anarchy, I won’t lend a hand to civil war.” (Edelstein spent three years in a Soviet gulag.)