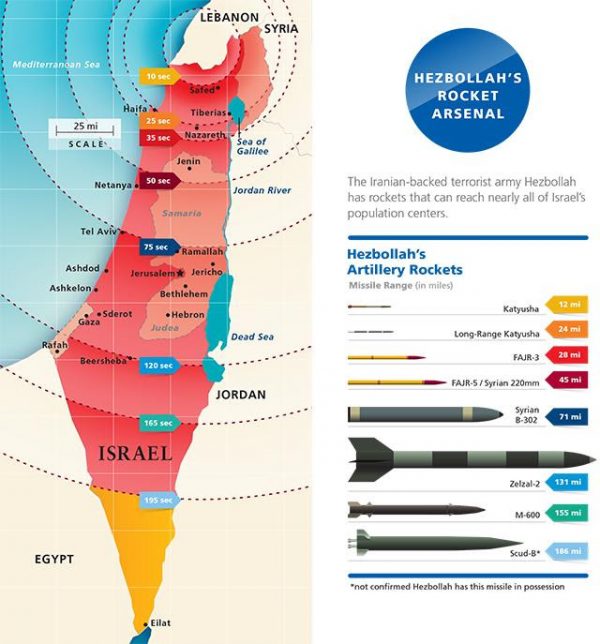 There has been ominous evidence for some time now that Israel’s northern front has become exceedingly more dangerous, with the growth, experience and sophistication of the terrorist organization Hezbollah. Born in the 1980’s as a local Lebanese guerrilla force, Hezbollah now has the trappings of an army to be contended with on several fronts. While maintaining its grip on Lebanon, especially in the south, over the past few years it has shifted its focus to Syria, fighting the mainly Sunni terrorist groups there, and assisting Iran in preventing the downfall of President Assad and his regime. In Syria, despite significant losses in manpower, Hezbollah has gained valuable fighting experience.
Along with its increased military capabilities, Hezbollah’s threat to Israel has grown significantly. It now possesses at least 150,000 missiles – more than that possessed by most countries – with many pointed at Israel. By allying itself with Iran in Syria, Hezbollah has been transformed into a strategic threat to Israel and is a force to be contended with.
Israel has been watching the situation in Lebanon and Syria very closely, and there are regular reports of Israeli strikes in Syria, with the aim of interdicting shipments of advanced weapons to Hezbollah in Lebanon.
These developments have raised the following question in Israel, which has been debated at the highest levels: What is the greater threat to the country, Hezbollah, with its 150,000+ missiles and capable fighting force, or Iran, with its long range ballistic missiles, ongoing nuclear weapons program, and growing threat to the entire Middle East and beyond?
There are those who maintain that the immediate, short-term threat from Hezbollah is more critical, as its missiles can now hit the entire country, and now with enhanced guidance systems, can be aimed at specific sites.
Others posit that Iran is the “mother of all threats”, and thus dealing with Iran should be given priority.
Whichever side gains sway, by necessity, Israel continues to develop and deploy defensive and offensive systems to deal with all threats, short and long term.
Yesterday’s Wall Street Journal contains an in-depth report on Hezbollah, which can be accessed by subscription HERE. Interestingly, the article is available unedited and in full via this link (click HERE), which is the website Pakistan Defence.
The Jerusalem Post ran the following article about a week ago: WHAT THREATENS ISRAEL THE MOST – HEZBOLLAH ROCKETS OR IRANIAN NUKES?, which lays out the arguments of both sides.
Today, the Jerusalem Post published two pertinent articles which merit reading:
IRAN ARMS MANUFACTURING FACILITIES IN LEBANON ARE NEW KIND OF THREAT
IS ISRAEL READY TO FACE THOUSANDS OF HEZBOLLAH MISSILES?