The AFSI, May 2017 Mission to Israel, was timed to celebrate the amazing, miraculous victories of the Six Day War of 1967 where Israel regained the Golan Heights, Judea and Samaria were restored, and Jerusalem was united. Israel was whole again. The speed with which the victories took place was unexpected and unprecedented. Israel had prepared 30,000 graves, in preparation for the worst. Instead, amidst the euphoria of victory was the bewilderment expressed by Israel’s PM Levi Eshkol – “What are we going to do with all of that?” It was that indecision and lack of preparedness for victory, which has led to the fifty years of “disputed” territories. 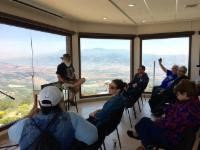 It is in these areas, in the Golan, in Judea and Samaria, in eastern Jerusalem, that AFSI has concentrated its efforts over the past 22 years when we have conducted our missions on a semi-annual basis. Now that the jubilation of the victories has been enjoyed, it is time for Israel to decide what it “will do with all that.” AFSI says it is time to proclaim victory, to declare sovereignty over Judea and Samaria, to make it clear that the Golan will never be relinquished, and to assert that Jerusalem will remain the undivided capital of Israel, with the Temple Mount permanently “in our hands.”

AFSI began the victory lap in the Golan, exploring the areas that had come under fire in 1967. 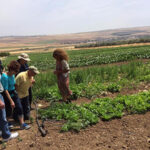 A visit to Nazareth Illit followed, where we learned that the city is threatened by Arab encroachment. A beautiful Shabbat was spent in Tsfat, and Sunday, eager to celebrate the restoration of Judea and Samaria to Israel in 1967, we began our visit to the Shomron with one of the first communities, Kedumim. We went on to Itamar, and then Yitzhar. 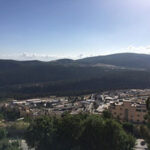 In Shilo we met Elad Ziv, from the expelled Amona community. We saw the barren hilltop in Shilo where promised new homes are supposed to be built, but where officials are killing the plans. The expelled families are living in two room dormitories in Ofra, without kitchens. This is a shameful situation. 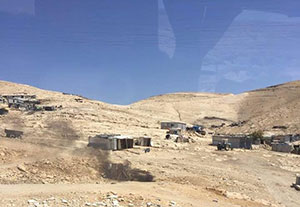 The next stop was the city of Ariel, and then on to Yerushalayim. The next morning, we joined with Regavim to see the rampant illegal Arab building in the E1 corridor, connecting Yerushalayim with Maaleh Adumim.

We continued on to Maaleh Adumim, and then met Dan Luria of Ateret Cohanim. He drove with us through eastern Jerusalem, pointing out reclaimed properties. That evening we attended the always exciting Moskowitz Awards event at Sultan’s Pool. 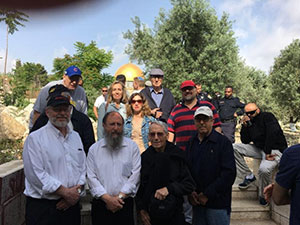 On May 23, we made the mandatory 7 AM trip to the Temple Mount entrance to meet with Rabbi Chaim Richman of the Temple Mount Institute. After experiencing the usual discriminatory practices against Jews, the group was allowed to enter the Mount. 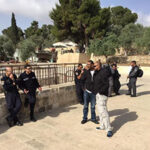 Arieh King, Jerusalem Councilman, then met the entire group and drove with us to the Atarot and Kalandia areas of northern Yerushalayim. The explosion of Arab building there, much of it on JNF land given to the Arabs, seems out of control.

The newly opened Levi Eshkol museum had served as the home and official residence of Prime Ministers David Ben-Gurion, Levi Eshkol, and Golda Meir from 1950-1974. Shavit Ben Arie arranged for us to meet with Professor Meron Medzini. He was the Director of the Israel Government Press Office in Jerusalem from 1962 to 1978. His first-hand report to us was fascinating, laying out the conditions prior to and following the 1967 war.

The Emek Tzurim Sifting project was our next stop, followed by a fun dinner at the lively, colorful, vibrant market place in Yerushalayim, Machane Yehudah.

YOM YERUSHALAYIM arrived and AFSI Board Member, Ken Abramowitz, known for his appearances on radio, TV, and in lecture halls, met us at the hotel for a talk on saving Western civilization.

Chaim Silberstein, head of Keep Jerusalem, joined us with a full busload of people for a tour of eastern Jerusalem. Most distressing is the separation fence which runs in and out of the Jerusalem Municipal border, wrapping the Shuafat Refugee Complex inside the border. Over 60% of Jerusalem’s residents live in eastern Jerusalem. Close to half of all of Jerusalem’s Jews live in the areas liberated in the Six Day war. Jerusalem must remain the eternal, undivided capital of Israel.

We drove through the crowded Jerusalem streets, already filling up with the Yom Yerushalayim celebrants, and disembarked at the Damascus gate to the Old City. Everyone was free to parade, march, dance, as he pleased until those who wished would gather again for the Ateret Cohanim dinner that evening at the Tayelet. 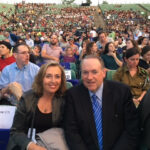 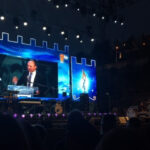 The Ateret Cohanim dinner honored Cherna Moskowitz and her daughter, Laurie, with unending praise for the work that they and Dr. Irving Moskowitz, z”l, did over so many years in redeeming Jewish homes in the Old City and eastern Yerushalayim. 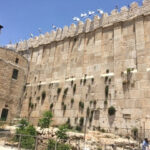 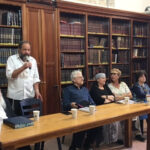 The following day, May 25, was Yom Hebron – the day Rabbi Goren single-handedly liberated Hebron. Organized by David Wilder, we met in the Maarat HaMachpela with the heroes and heroines of the early days of the settling of Hebron. Noam Arnon, head of the community, introduced Rabbi Eliezer Waldman, Elyakim HaEtzni, Yehudit Katzover, and Sarah Nachshon. Each one told their remarkable story of how the “Mitnachalay Hebron” – the return to the land of one’s inheritance – Hebron – was begun at Pesach time in 1968. This was the continuation of the 4000 years of Hebron’s Jewish history.

Oz V’Gaon and Kfar Etzion were our next stops. We viewed the remarkable film about the bravery of the Gush Etzion settlers who fell on May 13, 1948, heroically defending the gateway to Jerusalem.  September 1967, their children and grandchildren returned. Today there are over 100,000 Jews living in Gush Etzion. 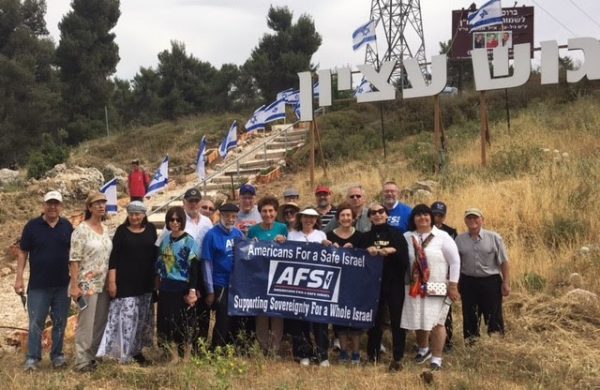