Roger Waters has been a vocal advocate for BDS and has promoted anti-Israel activism for years. He will be playing at the Barclays Center in Brooklyn on September 11 and 12 at 7:00 PM.

WE SAY, ROGER, ENOUGH OF YOUR
ANTI-SEMITIC GARBAGE!
Silence equals complicity. Silence permits anti-Semitism to grow.
Wear blue and white. Wear your organization’s shirts. Bring Israeli flags.(not on wooden sticks, please) Bring signs!
Be there! Don’t be silent!
============================
There is a HUGE amount of information available online about Roger Waters and his support of BDS, his anti-Israel activism and anti-Semitism.
Waters has led many campaigns against artists performing in Israel. Charles Asher Small, the founder and director of the Institute for the Study of Global Antisemitism and Policy (ISGAP) has called Waters “the leader of the BDS movement at the cultural level.”
The Battle Against BDS Proponent Roger Waters
Waters has used anti-Semitic and anti-Israel imagery during his concerts, such as a huge pig-shaped balloon with a star of David on its side.
Pig Balloon at Roger Waters Concert Features Star of David; Wiesenthal Center Calls Him ‘Open Hater of Jews’ (VIDEO)
He has compared Israel to Nazis, and said that he knew of no more oppressive regime on the planet.
Roger Waters Compares Israel to Nazi Germany in Facebook Q&A
He spews forth lies and falsehoods about Israel at every opportunity he can get, preaching to the uninformed and gullible, as is shown in this YouTube video, recently uploaded by pro-Israel blogger Israellycool. 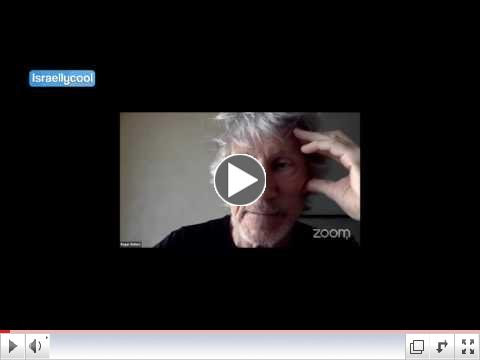 Click HERE for much more on Israellycool’s blog about Waters’ pro-BDS, anti-Israel positions.
And, click outoftuneny.com/ for New York’s JCRC’s repository of information about Roger Waters.
============================
In addition to playing at the Barclays Center, Waters is scheduled to perform at the Nassau Coliseum on the Jewish Sabbath, Friday, September 15 and Saturday, September 16.
There is hope that his performing on Long Island will be cancelled as it violates a local law against the anti-Israel Boycott, Divestment and Sanctions movement, according to Howard Kopel, a Nassau County lawmaker.
Jpost: Roger Waters NY Concert a Violation of Anti-BDS Law, Says Lawmaker
We will be watching this closely.
It’s Worse Than We Thought:
The Center For Jewish History New CEO
Must Be Fired For Radical Viewpoints about Israel
We reported earlier this week that David N. Myers, the new CEO of the Center For Jewish History, is a leader of The New Israel Fund, holds
leadership positions of IF Not Now, When and of J Street, and supports “some forms” of boycotting Israel. Center For Jewish History new CEO holds radical left viewpoints
Today we learn that he is also an Academic Advisory Board Member for Jewish Voices for Peace (JVP), one of the most nefarious anti-Israel organizations out there.
As reported in Arutz Sheva, The incoming head of “…the biggest repository of Jewish history in the United States is part of an organization that opposed efforts to adopt the State Department definition of anti-Semitism. Jewish Voices for Peace today feature in the media urging “young Jews not to take part in Birthright Israel trips.”
Center for Jewish History CEO is on Jewish Voices for Peace board
It is urgent to contact CJH to express your displeasure at their hiring of someone to such an important position with such extreme anti-Israel bias. It is unconscionable that the head of an organization which serves as the biggest repository of Jewish history in the United States, and serves as a centralized place of scholarly research, events, exhibitions, and performances should hold such extreme views about Israel.
The Center For Jewish History is located at 15 West 16th St. New York, NY 10011. They can be contacted via the following:
Website: http://www.cjh.org/
Phone: 212.294.8301
Email: inquiries@cjh.org
Stay tuned for plans for massive protests.
Help Keep Israel Safe – Donate Now
Scroll to top