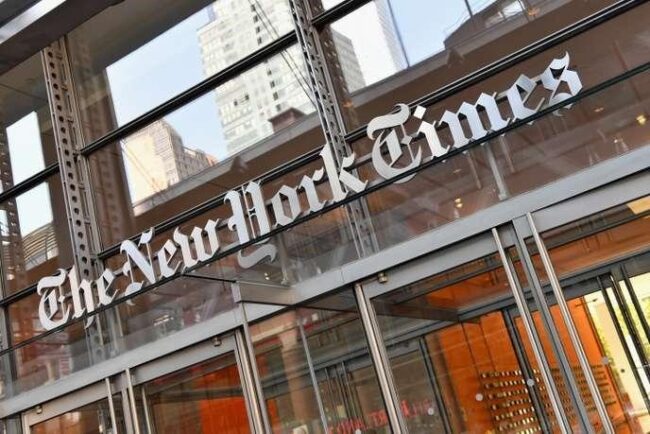 Over 500 people gathered in front of the NY Times building on 8th Avenue @ 40th St. in NYC to protest against the vile, obscene cartoon that had appeared over the weekend in the International edition of the NY Times. It depicted a blind Trump, wearing dark glasses and a yarmulke, being led by a dog with the face of Netanyahu. The outrage over this Der Sturmer type of hatred prompted grass roots organizers, Jeff Wiesenfeld, Hillary Markowitz, Helen Freedman and Judy Kadish of AFSI, to quickly call for the protest at the Times. Starting time was scheduled for 5:30, but hundreds of people had gathered by 4:30. Jeff Wiesenfeld, the MC, opened the program with a denunciation of the Times for its 120 year old campaign of slander and bias against Israel and the Jews. Although the Times attempted to lay the blame for the cartoon on one careless editor, we know that the entire newspaper and its owners are responsible.

The impressive roster of speakers, including Assemblyman Dov Hikind, Prof. Alan Dershowitz, Rabbi Elie Abadie, and Alex Landsman, all sounded the same note in different ways. The shameful record of the Times, the evil words leading to evil deeds such as the latest terror attack in Poway, CA, the Times’ support for the anti-Semitic, anti-Israel Congressional trio of Omar, AOC, and Tlaib, and the need to actively combat the rising anti-Semitism in America and world wide, were all laid out in detail.

Another theme that the crowd seemed to enjoy was that of the duplicity and uselessness of our Democratic elected officials. Where was the “Shomer Yisrael” – Schumer, on this issue? Where was Nadler? Engel? Any Democrats? There was only disgraceful silence. It was agreed that they would have to be voted out of office if possible. On the other hand, the crowd was urged to contact President Trump and PM Netanyahu, expressing concern about their depiction in the blasphemous cartoon and offering full support to them.

AFSI’s Charlie Bernhaut again made powerful signs accusing the Times of having blood on its hands and finding it guilty for its 120 year record of anti-Semitism. Hillary Markowitz did an amazing job preparing professional signs and arranging for the sound and stage. A large contingent of the press was present, due in part to the superb efforts of our PR professional. The protest was covered prominently in the New York Post and major Israeli media outlets. It will be interesting to see if it gets covered in other US or international mainstream media or whether the fake news philosophy will prevail.

Watch the video of the protest courtesy of Ido Siman Tov HERE.