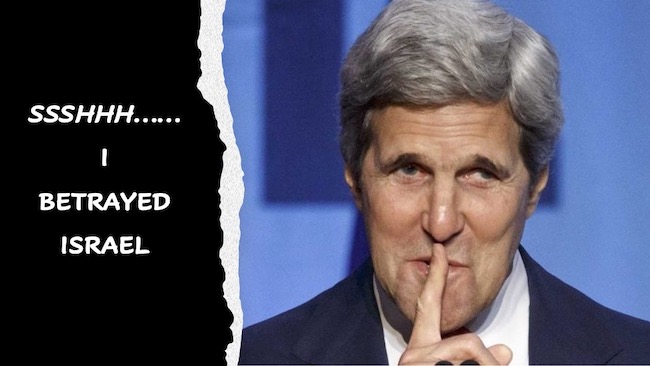 Former U.S. Secretary of State John Kerry is accused of telling Iran about Israeli operations and now there are demands for him to be investigated, and resign, over what he allegedly told them.

Iranian Foreign Minister Mohammad Javad Zarif, in a leaked audiotape, claimed that while Kerry served as America’s top diplomat during the Obama administration, he discussed more than 200 operations that Israel had carried out in Syria against Iranian targets. Zarif said that he was astonished at the revelations.

This comes after Kerry’s additional meetings with Zarif, held as a private citizen after he left office, have also raised questions about what he has told Iranian officials over the years. In a Twitter post, Kerry called the claims “unequivocally false.”

The Iran regime certainly has no better friend than John Kerry. Since the nefarious activities that lead to the 2015 Iran ‘deal’, we’ve always known that Kerry has been in lockstep with this enemy – the #1 state sponsor of terror. Kerry’s actions then and now have thrown diplomacy out the window, especially when he has not been held accountable by US officials. Kerry’s leaking Israel’s covert information to the enemy is a flagrant betrayal of trust in the history of US – Israel relations. It puts Israeli and American lives in danger. In his diplomatic position, Kerry is charged with protecting the interests of the United States and its allies, not aiding and abetting the enemy. While we are glad Kerry’s warm and fuzzy relationship with Iran is being exposed once again, there must be an investigation into his illegal and inappropriate ‘diplomacy.’ John Kerry is a self-serving rat, a disgrace – and a danger – to the United States. Calls must be made for him to answer for his actions. Better yet, let’s call for him to be FIRED.

ACT NOW!! – CLICK HERE TO CONTACT THE U.S. DEPARTMENT OF STATE
DEMAND THAT JOHN KERRY BE REMOVED FROM HIS POSITION IMMEDIATELY

Source:
Calls for John Kerry to be investigated for what he told Iran, by Eric Shawn. Fox News, April 26, 2021