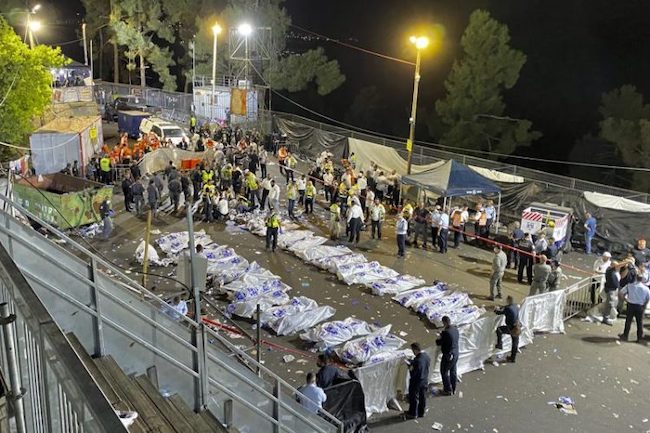 Americans For A Safe Israel is in mourning with all of Klal Yisrael as the country processes and recovers from the Lag b’Omer tragedy at Mount Meron last Thursday night. Our thoughts are with the families who lost loved ones and we pray for a refuah shlema – a speedy recovery – for all of the victims.

Dozens of people were crushed to death in a stampede that broke out in the early hours last Friday morning at the Mount Meron prayer compound, where tens of thousands of Jews had gathered. At least 45 people were confirmed dead and 150 people were injured, with dozens in serious condition and several defined as critical.

The incident happened at around 1:00am but the specific cause of the disaster was not immediately clear. Initial reports said a stand had collapsed at one of the services where thousands of people were taking part. However, Magen David Adom said the tragedy was caused by overcrowding at a narrow pass at the prayer compound.

A police official said dozens of participants in the service had “slipped” on a metal floor, falling on those around them and causing a crushing domino effect.

“The disaster at Mount Meron is one of the most difficult tragedy’s to strike Israel. We will conduct a thorough investigation to make sure this type of tragedy never happens again. Sunday will be a national day of mourning. Let us all come together and pray for the victims and their families and for the wounded’s speedy recovery,” Netanyahu said while visiting the scene Friday morning.

May the Jewish Nation State know no more sorrow. May they only know joy and peace.