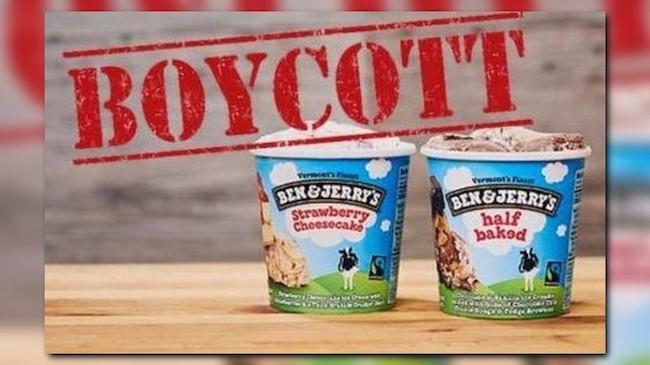 While Judea and Samaria stands strong, is Ben & Jerry’s headed for a Rocky Road – or total meltdown?

Ben & Jerry’s announced earlier this week that it would end sales of its ice cream in the “Occupied Palestinian Territory (OPT).” Also coming to light is that their original intention was to end sales of their product throughout all of Israel. The despicable action from the owners – two “woke,” JINO Jews – aligns itself with the anti-Semitic, hate-Israel ways of the BDS movement.

Numerous kosher stores, and even Morton Williams, a non-kosher supermarket, are removing Ben & Jerry’s products from their store shelves (Morton Williams will remove about 70%). Calls around the world have also ignited campaigns to revoke Ben & Jerry’s kashruth certifications. The Town of Hempstead, Long Island, announced a move to cut ties and municipal contracts with Ben & Jerry’s and its parent company, Unilever.

Israeli Ambassador to the United Nations Gilad Erdan said that he has written to 35 United States governors noting that the decision by Ben & Jerry’s violates individual states’ anti-BDS legislation.

Did Ben & Jerry’s take into consideration that not selling their product in the “OPT” will force hundreds of PA Arab workers onto the unemployment line? The very people they take sides with will ultimately be hurt. What’s really behind Ben & Jerry’s move? Eugene Kontorovich, constitutional and international law professor and expert on legal issues in the Israeli-Arab conflict tweeted: “SCOOP (on Ben & Jerry’s): I’ve been told by (a Ben & Jerry’s) insider that company’s board invited Omar Shakir, a professional BDS activist, to advise them, rejected calls to hear experts on other side. This ain’t about the settlements.” Shakir, former Regional Director of Human Rights Watch, was kicked out of Israel in 2019 for being a BDS activist.

Since their announcement, thousands of memes and news reports began circulating like wildfire across social media, blowing up our phones, and flooding our personal inboxes. The decision by Ben & Jerry’s triggered a firestorm of strong reactions from Jews worldwide that work in Israel’s favor.

On the flip side, Avi Zinger, the CEO of Ben & Jerry’s Israel, has been fighting for years against BDS groups and has refused to implement the boycott.

In spite of all of this, the residents of Judea and Samaria are standing strong. Samaria Regional Council head Yossi Dagan issued this statement in Arutz Sheva:

We will not give up Samaria, the ancient kingdom of Israel, for ice cream, nor will we give up Joshua’s Altar or ancient Shilo for a McDonald’s hamburger.

The people of Samaria and this country will stand firm long after Ben & Jerry’s ice cream melts and disappears from the world. We will not give in to this anti-Semitism that permeates Jews in the United States as well.

I call on all residents of the State of Israel and Samaria, and all lovers of Israel in the world, to stop consuming the ice cream that is trying to create a boycott of Israel.

We will not succumb to threats from either left-wing organizations or commercial companies that are willing to boycott Israel in order to flatter certain people. We will continue to build Samaria, enjoy culture, a good education and also ice cream. Not necessarily Ben & Jerry’s.

Who knew that a beloved summer treat could trigger such a strong public response that has united Jews in favor of Israel. If ice cream could drive such a backlash against Ben & Jerry’s, we wonder what it will take to change the worldwide narrative that works day and night to delegitimize Israel.

*** TAKE ACTION ***
Contact Ben & Jerry’s to demand they stop their discriminatory boycott of the 800,000 Jews in eastern Jerusalem and Judea and Samaria.