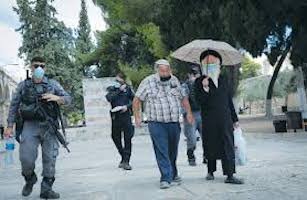 As a new normal takes shape in the Middle East, let’s not forget the current not-normal status of the Jewish people still denied its legal and historical right to worship freely and peacefully on the Temple Mount.

The two Trump brokered peace deals in the last month have created a new buzzword – normalization. Things are now normalizing that had been abnormal for far too long.

One of the most abnormal and aberrant things about the Middle East conflict is the rejection of a Jew’s right to pray on the Temple Mount. This must change if an accord between Abraham’s children is truly meant to be meaningful.

Source:
Is it time to ‘normalize’ the Temple Mount?, by Nave Dromi. Jerusalem Post, September 13, 2020