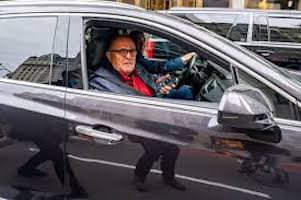 Seven were arrested Sunday in clashes between a “Jews for Trump” caravan that was passing through Times Square in midtown Manhattan and a march of anti-Trump protesters who arrived from Brooklyn. The anti-Trump protesters blocked the cars in the convoy and clashes began as some drivers got out of their cars to confront their attackers.

In addition to Jews being attacked, former NYC Mayor Rudy Giuliani who rode through the NYC with Trump Caravan, was pelted with eggs and vile insults.

Giuliani said, “I would love to have had a campaign commercial of it and put it on in the middle of America and say, ‘Who would you prefer for the next four years? This group of foul-mouthed people who don’t seem to have a vocabulary beyond three words, or these very nice Jewish people who are driving in the car and not saying anything back and not doing anything other than exercising their right to say they’re for Donald Trump.”

Americans For A Safe Israel does not endorse candidates for political office. We do, however, demand that Jews be free to exercise their rights in this country without being attacked, such as we saw yesterday. Thank you Mayor Giuliani for coming to the defense of NYC’s Jewish community by speaking the truth.