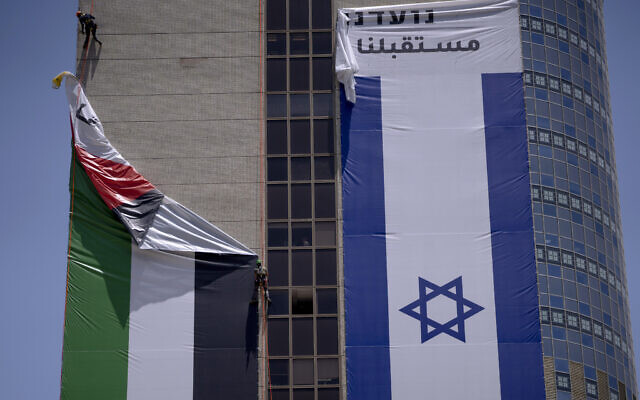 A law banning the hoisting of Palestine Liberation Organization (PLO) flags in Israeli universities and academic institutions was approved last night in a preliminary reading in the Knesset plenum. The law was submitted after PLO flags were raised at recent “Nakba Day” rallies at Ben Gurion and Tel Aviv universities.

The explanatory notes to the bill state that it “draws a red line between a legitimate protest and a protest during which flags are flown by those who do not recognize the State of Israel or pose a threat to its existence, in bodies budgeted or supported by the state.”

Just yesterday, a large Palestinian flag hung by a left-wing group near the Diamond Exchange in Ramat Gan was taken down after sparking social media criticism and public calls by lawmakers for its removal.

Israel’s beautiful blue and white flag is a symbol of its Sovereignty as one free nation. It proudly waves as a reminder of all that Israelis have defended and sacrificed for the country. AFSI applauds the 63 Knesset members who voted in favor of this important bill, which included Prime Minister Naftali Bennett (16 opposed while Yesh Atid, Blue and White and Labor parties were absent). The bill recognizes that hostile enemies of Israel should never be permitted to dictate their message of hatred and violence in this way.