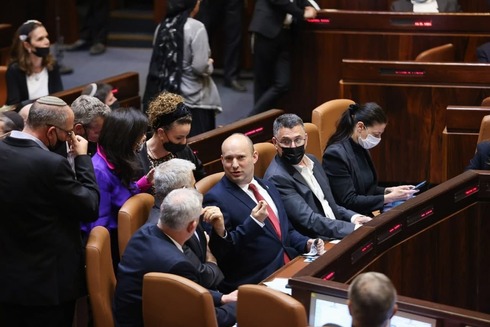 In a major blow to Israel’s fledgling coalition, the Knesset on Tuesday morning failed to approve an extension of the contentious Palestinian family reunification law, after a rebel member of Prime Minister Naftali Bennett’s Yamina party voted against the measure.

The early morning vote — after an all-night debate — ended in a tie, with 59 lawmakers supporting the motion and 59 opposing it, meaning the law will expire later Tuesday.

However, even if the opposition had mustered an absolute majority of 61 MKs in the vote, the government would have remained intact. To bring down the coalition, the opposition would need to muster 61 or more votes, backing a specific, named candidate for prime minister, in a formal motion of no confidence in the government.

The family reunification law, which blocks the automatic granting of Israeli citizenship or residency to Palestinians on the basis of marriage to an Israeli, was first enacted in 2003, and has been extended annually.

Prime Minister Bennett blasted the Opposition and Opposition Leader Benjamin Netanyahu on Tuesday. He accused them of “directly hurting Israel’s security, out of a sense of bitterness and despair.”

Tovah Zimuky of Ynetnews.com offers this outlook: The failure of the vote is merely a symbolic act that will lead to further bickering between the opposition and the coalition over who is more hawkish and more patriotic. It will not actually lead to Israel being flooded with requests by Palestinians married to Israelis. Instead it will primarily lead to an increase in family reunification requests filed with the Interior Ministry and the Shin Bet security service, with a similar rise in petitions to the High Court of Justice from those who will be refused.

Failing to extend the Citizenship Law represents what should have been a critical moment for Israel’s leadership. At a time like this, we hoped the Opposition and the ruling coalition would have come together to work for the sake of the security of the Jewish Nation State, not to mention, for the good of the citizens of Israel and the country overall. While petty politics took preference, Israel’s security is now at risk and that is deeply concerning.

The Citizenship Law was intended to strengthen Israel’s security, not burden it and it’s failure to pass is one more headache Israel doesn’t need. We pray that the Citizenship Law will be reintroduced to the Knesset in the near future.

Expiry of Citizenship Law is a headache for Israel, not a disaster, by Tova Zimuky/Ynetnews.com, July 6, 2021