Throughout the Republican primaries, the presidential campaign against Hillary Clinton, his acceptance speech, and continuing during the first few weeks of his presidency, President Trump has accurately and correctly, named and defined the enemy of the western world, Islamic terror. As he stated time and again, one cannot confront and defeat one’s enemy if one cannot name it.
AFSI’s Chairman, Mark Langfan, has spoken and written often about the threat of Islam to the western world, and how bulwark Israel helps prevent its spread westward and upward toward and through Europe. He has now come out with an article that puts into historical context, the threat of Islam to the west, and how President Trump is the world’s leader to confront and stop it, just as Charles Martel was more than a thousand years ago.
He begins:
In 732 A.C.E., the Umayyad Islamic Terror Caliphate in occupied Spain, or what was then al-Andulus, invaded the Duchy of Aquitane or what is now south-western France, and ransacked the French city Bordeaux. Seeing the grave threat of the ravaging Islamic forces to Christianity and his Frankish Kingdom, Charles Martel marshaled his forces, and defeated the radical Islamic general Abdul Rahman Al Gahafiqi in the battle of Tours-Poitiers (a little east of Normandy).
In 732, in the face of massive Islamic victories, Martel’s Christian victory gave hope to the Christians and they renamed him Charles “The Hammer” Martel. Martel’s victory steeled the arc of Christian Europeans, and enabled them to defeat the rampaging radical Islamic terrorists of that day.
Today in 2017, US President Donald J. Trump sees the same existential threat of radical Islamic terror to the United States and the Free World.  And, we must all support him, and pray for his absolute success: Failure is not an option.

This Sunday, Feb. 12: Sovereignty Conference in Jerusalem
The upcoming Sovereignty Conference in Jerusalem, Sunday February 12, co-sponsored by AFSI, has taken on an air of urgency. Now that the Regulation Law has passed, there is a strong likelihood that the Israeli Supreme Court will strike it down. There is significant opposition to the law in Israel, including by Attorney General Avichai Mandelblit, who has stated he will argue against the law in court.
European nations are throwing fits about the law, claiming that it “damages Israel’s credibility” (France), and expressing “disappointment and lost confidence” in Israel (Germany). The UN, of course, has stated that the law violates international law. Significantly, the US administration has stayed quiet so far, most likely waiting for President Trump’s meeting with Israeli PM Netanyahu on February 15.
The full title of the Conference is, The 4th Sovereignty Conference: “Sovereignty With Responsibility”; An additional step forward in awareness and practical implementation of the vision of full Israeli sovereignty over Judea and Samaria.
Israel is under extreme pressure to capitulate to demands to cede land in Judea and Samaria, under the false pretense that the only way to secure “peace with security” is to withdraw from its heartland, Judea and Samaria, evict tens of thousands of its citizens, and prepare the way for a terrorist state in its stead.
This conference will put this absurd notion to rest, making the case that for Israel to be a secure nation, it must have sovereignty over Judea and Samaria.
For those in Israel this Sunday, please attend this conference! There will be a series of all-star speakers from all venues of Israeli society. The world wants to shape Israel’s future, and many would like to shape a world without Israel. Israel must maintain its sovereignty, which must extend throughout the entirety of the Land of Israel. This conference will point the way.
To read “ALL ROADS LEAD TO SOVEREIGNTY” an article with additional background information click HERE 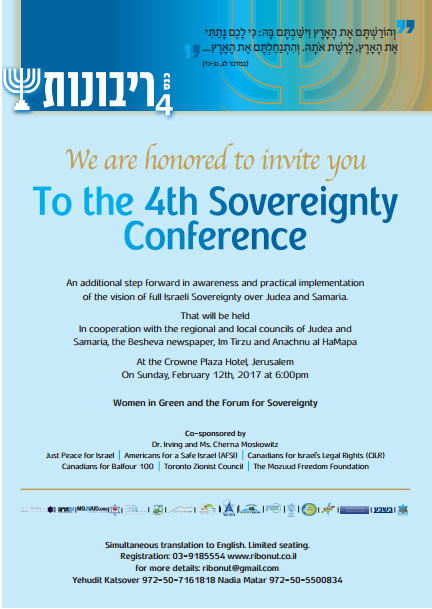 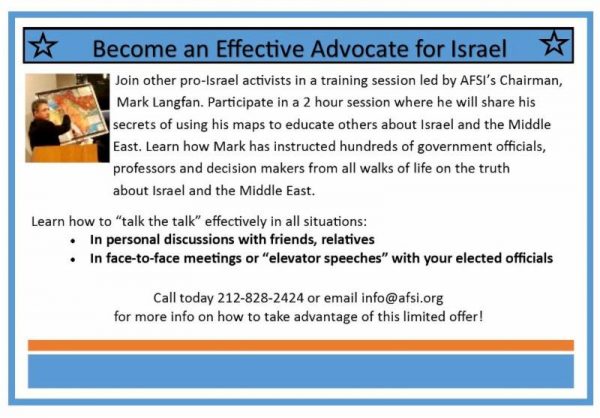 View A  Powerful Video of the AFSI Chizuk Missions

AFSI Chizuk Missions are unique. Participants in an AFSI mission return to their homes informed, educated, enlightened and invigorated, ready to advocate for Yisrael Shleyma, a “full” Israel.
Among other places, AFSI missions visit Judea and Samaria, from the large cities to the small hilltop communities; from the most modern factories in the industrial zones of Ariel to the ancient stones of Hebron and the communities of Ofra and Amona.
A key differentiator separating AFSI Chizuk Missions from other trips is the personal touch. For more than 20 years, AFSI has taken groups to Israel, and over the years, AFSI returns to provide chizuk. AFSI travelers build relationships and become lifetime friends with Israelis on the front lines, wherever they may be. From those protecting Jewish life in southern Tel Aviv from thousands of illegal squatters, to heroes living in eastern Jerusalem among a hostile Arab population, AFSI is there.
Get a taste of an AFSI Chizuk Mission from our video on our website. Click HERE to view it and then say to yourself, “Next time I go to Israel, I’m going with AFSI.”