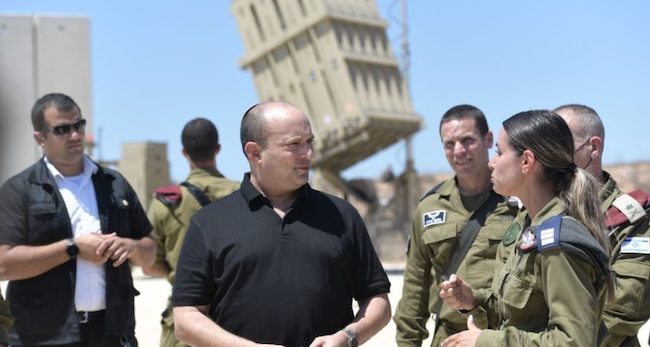 The prime minister’s visit came amid criticism over Israel’s lack of response to Monday’s rocket attack toward Israel, the first of its kind since May.

The prime minister’s visit came amid criticism over Israel’s lack of response to the attack and growing concerns over Bennett’s inability to carry out a military campaign without the required support from his coalition.

“The purpose of this visit was to make sure that the IDF, the Southern Command and the Gaza Division are prepared – and they are, Bennett said. “Our mission here is to provide long-term security to residents of southern Israel and the Gaza border communities. We will choose the time, place and conditions of our response, not anyone else,” he added, stressing that Israel holds Hamas responsible for any and every attack carried out from Gaza. “Our only interest in Gaza is maintaining peace and returning our boys home,” Gantz said, adding that “Israel is determined to defend itself and will know how to when necessary.”

Israel has avoided responding militarily to a rocket fired from Gaza on Monday, due to supposed sensitive ongoing negotiations with Hamas that have the potential to reach a breakthrough, Channel 12 news reported on Tuesday. According to the report, which did not cite a source, there is a possibility of a deal that will allow Qatari funds to enter Gaza
(DANGER!!) and could include the release of Israelis being held by Hamas.

Can this explanation of why Bennett has not responded to Monday’s rocket attack be trusted? Without more transparency from Bennett’s government, it seems that Israelis are being pushed aside to appease the Arabs. Whether or not it’s ultimately true….those are the optics. As of this moment, that does not bode well for the mission of keeping Israel Safe and Sovereign.

TV: Israel not responding to Gaza rocket due to progress in talks with Hamas, by Emanuel Fabian/Times of Israel, August 17, 2021