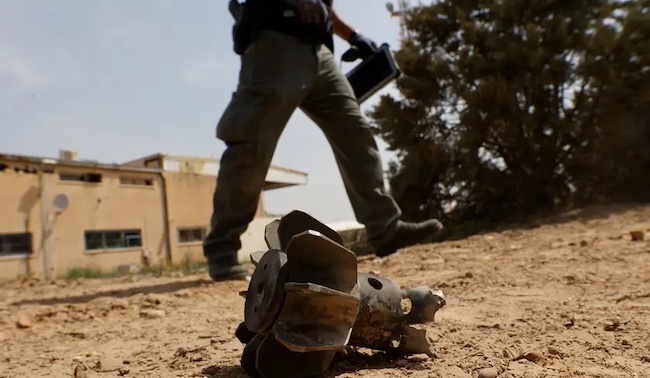 Terrorists in Gaza fired rockets toward Israel for the third night in a row on Sunday and early Monday. The Iron Dome system intercepted two of the five projectiles.

Four people, including a pregnant woman, were lightly wounded after falling while running to bomb shelters early Monday, medics said.

A first projectile was detected by the Israel Defense Forces, which said it only set off red alert sires in an open area where it evidently fell. A second rocket landed inside Gaza near the security fence.

Palestinian terror groups said that the weekend’s rocket attacks were in response to ongoing unrest in Jerusalem. Arab residents have demonstrated for several days against Ramadan restrictions on congregating near Jerusalem’s Damascus Gate. This is how a ‘peace partner’ expresses their freedom of worship.

Prime Minister Benjamin Netanyahu called on Saturday for the military to “prepare for any scenario” with Gaza. Defense Minister Benny Gantz similarly said that the Israel Defense Forces “will do what is necessary so the calm is preserved,” following security consultations at defense headquarters in Tel Aviv.

Also, after an emergency situational assessment meeting, Chief of the General Staff, Lt. Gen. Aviv Kohavi, decided to postpone his forthcoming trip to the United States. Kohavi was to be part of a team who will meet with US officials about the US’s dangerous intent to re-enter the Iran ‘deal’.

The threat that Israeli residents are under right now cannot be imagined unless one is in their shoes. AFSI received a first hand voice message yesterday from Dan Luria, executive director of Ateret Cohanim and spokesperson, who detailed the ongoing attacks, which began on Shabbat. He tells us that, “for 48 hours the ugly head of Arab hatred and the Ramadan riots was raised…with ‘convenient targets’ being Jewish families in the old Yemenite village of Shiloach. But we are resolute and no amount of Arab violence will drive us (the rightful heirs of this land) out of our homes.”