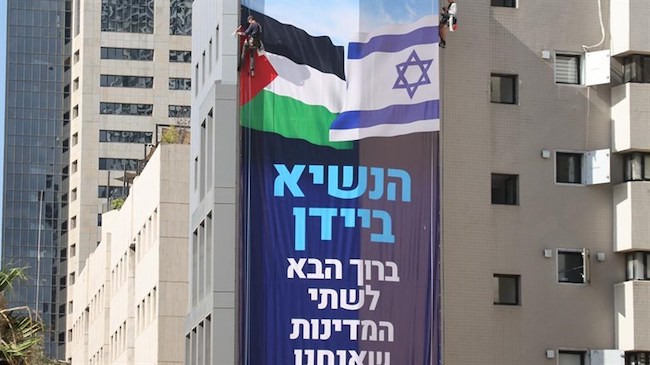 Former Prime Minister Benjamin Netanyahu criticized the left-wing Peace Now organization, which hung a huge sign on a building in central Tel Aviv with Israeli and PLO flags ahead of Joe Biden’s visit to Israel on Wednesday.

Netanyahu said that “the hoisting of the Palestinian Authority flag in the heart of Tel Aviv is another expression of the loss of sovereignty and the violation of our national dignity under the Lapid government.

Matan Peleg, chairman of Im Tirtzu, responded: “Peace Now is another organization that makes a living from the conflict and exists thanks to the money of subversive foreign governments that want to undermine the existence of the State of Israel.”

Make no mistake about it. We are not against a peaceful arrangement between the PA Arabs and Israel. (Of course any such arrangement would only stay peaceful so long as Israel remains the much stronger power.*) The PA is not interested in peace. They want Israel in pieces and they want to claim them all. The suicidal left-wing organizations that erected this billboard are a danger to all of Israel. Until they come to accept the truth about the “conflict,” we trust the right thing will be done and that Israel will take down the billboard immediately.

*Asserting Israel’s legitimacy then and now, by Douglas Altabef/JNS, July 11, 2022