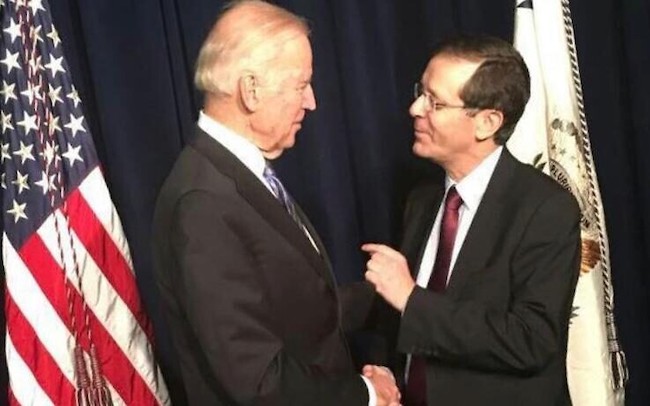 The announcement by President Isaac Herzog that Joe Biden is going to be awarded Israel’s Presidential Medal of Honor during his visit to the country this week has raised a few eyebrows.

As Ruthie Blum points out in her JNS article, the award makes a mockery of the Taylor Force legislation to stop American economic aid to the P.A. until it stops encouraging terrorism by funding surviving perpetrators.

According to Herzog, the purpose of the award is “to thank [Biden] for being a true friend of Israel” and for his “decades-long support for Israel’s security, deepening our alliance and fighting anti-Semitism” and anti-Israel bias.

Let’s take a look at how that statement matches with Biden’s “accomplishments”:
1) Overturned then-President Donald Trump’s successful policies on both the JCPOA Iran “nuclear deal” and the freeze on aid to the P.A. The latter was done, despite Abbas’s vow that if he had only a single penny left, it would be paid to families of the martyrs and prisoners. The former is a threat to the entire world, not just Israel.
2) Continues to advocate for a two-state solution, which is an existential threat to Israel and ignores her legal rights to the land.
3) Resumed U.S. funding to UNRWA, which enables it to continue teaching children to hate and murder Jews.
4) Maintained silence, acquiescing to instead of condemning or taking any action against the anti-Semitic Democratic “Squad” in Congress which is moving the democratic party further left than ever. Their platform of “intersectionality’ attempts to normalize virulent
anti-Semitic and anti-Israel sentiment. Their growing group of sycophants constantly post hostility towards Jews and Israel on social media. They continue to encourage the growth of Jew Hatred in the United States.
5) Undermines Israel’s safety and sovereignty with his failed leadership.

This constitutes a record of achievements for Israel? This award to be bestowed upon Biden is not only unearned, its errant nonsense. If Lapid and Herzog think photo-ops with Biden are worth compromising Israel’s dignity, we hope they will soon recognize the error in judgment. It is sad to see the disintegration of integrity and value of this award.