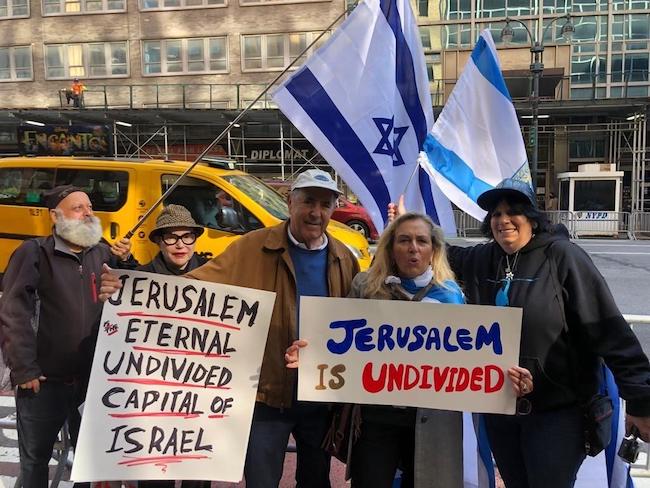 Several weeks ago, the Biden administration, led by Secretary of State Antony Blinken, announced plans to open a Palestinian consulate in the heart of Jerusalem. Prior to the United States Embassy move from Tel Aviv to Jerusalem during the Trump administration, the building was used as a consulate and had a consular services office in Eastern Jerusalem that primarily served the needs of the Arab population. The consulate the Biden administration would like to open to serve the Palestinian population is located on Agron Street in the heart of Western Jerusalem.

Yesterday morning a large group of dedicated activists gathered together across from the Israeli consulate in midtown Manhattan to show solidarity with our Israeli brethren who were simultaneously staging their third vigil with 20 other organizations to halt the opening of the Agron Street mission.

The New York City vigil was initiated and organized by Americans For a Safe Israel’s Director, Judy Freedman Kadish and joined by Yad Yamin New York’s Karen Lichtbraun as well as Liz Berney and Alan Jay from ZOA. The group held a vigil simultaneously with Jerusalem to “Just Say NO” to a Palestinian Authority Consulate in Jerusalem.

Kadish was simulcast to the group in Jerusalem, appearing on a wide screen there to a large and enthusiastic audience in attendance. Our friends in Israel need to know that they have our absolute support on their position on the unlawful consulate.

The essence of Kadish’s message was:

We are here holding a vigil in solidarity with You!

We ask the Israeli government to hold firm in its denial of the US desire to open a consulate in the middle of Jerusalem to serve the PA.

In Israel this past Saturday evening, Prime Minister Naftali Bennett, supported by Foreign Minister Yair Lapid, stated that the US consulate for the PA should not be placed in Jerusalem.

We have yet to hear an acknowledgment from the Biden administration of Israel’s position. Under international law the US MUST have permission of the host country to open any type of consulate.

The Biden administration MUST STOP TRYING TO DIVIDE JERUSALEM!

Given the stated position of the Israeli government, The Sovereignty Movement and the New York group will hold off on further vigils while they await developments in Israel and the US. Stay tuned!