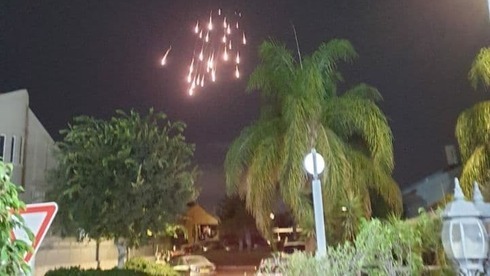 Israeli aircraft struck a series of targets in the Gaza Strip early Monday in response to a series of rocket launches out of the Hamas-ruled territory. It was the third consecutive night of fighting between the enemies.

On Sunday, A man and a boy were lightly wounded while running to a bomb shelter in Sderot. A 53-year-old man was evacuated to hospital with light injuries. On Saturday night, a 29-year-old man suffered injuries while running for shelter.

Tensions have been heightened following last week’s escape from an Israeli prison by six Palestinian inmates, as well as struggling efforts by Egypt (with its Islamist leadership) to broker a long-term cease-fire following 11 days of consecutive terror attacks back in May.

The Israeli military reported three separate rocket launches late Sunday and early Monday above several localities near the Gaza Strip. According to the IDF, at least two of the launches were intercepted by its Iron Dome rocket defense system.

In response, the IDF said it attacked a number of Hamas targets, including several outposts, as well as a warehouse where the military said the terrorist group used to store weapons, ammunition and which served as a gateway for a tunnel into Israeli territory.

A member of the military Spokesperson Unit said in a statement, “The IDF will not accept a situation in which terrorist organizations act against the Israeli home front. The military will continue to respond strongly to terrorist acts from the Gaza Strip and considers Hamas responsible for everything that happens in the Strip.”

Egyptian negotiators passed a message from Israel to Gaza, warning that continued rocket fire would trigger a “very violent” response that may lead to a military operation in Gaza, Lebanon’s Al Akhbar newspaper reported.