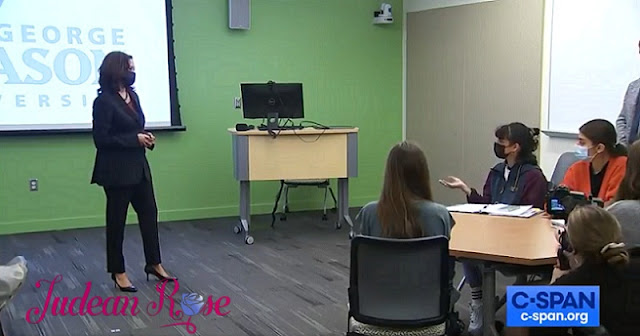 Vice President Kamala Harris broke with several decades’ worth of bipartisan support for the Jewish State on Tuesday when she said she “was glad” that a student had brought up concerns about funding Israel’s “ethnic genocide” and “displacement of people.”

The student was referring, of course, to the standalone bill approving $1b to replenish Iron Dome after terrorists in Gaza shot more than 4,000 missiles at Israeli civilians earlier this year, and this is important to state: noncombatants. The Jewish men, women, and children targeted by these missiles are not soldiers. And no one gets to call them that for just living in a city that has belonged to their people for thousands of years. They are simply just Jewish people, living their lives.

Contrary to what Vice President Kamala Harris told this student—who may be quite sincere, being ignorant, or, on the other hand, perfectly aware she is spreading anti-Semitic propaganda—it is not healthy to debate the right of Jewish people to defend themselves in the face of terror. It is not healthy to encourage the voices that speak out against the rights of Jewish children, for example, to live.

Source:
VP Harris Tells Antisemitic Student “Your Truth” Has a Right to Be Heard, by Judean Rose, September 29, 2021