AFSI’s good friend Nadia Matar of Women in Green, recently spoke with Arutz Sheva about the world’s condemnation of Israel and what referring to the Land of Israel really means. She stated that she welcomes Trump’s election and calls to encourage Netanyahu to apply Israeli sovereignty in Judea and Samaria. 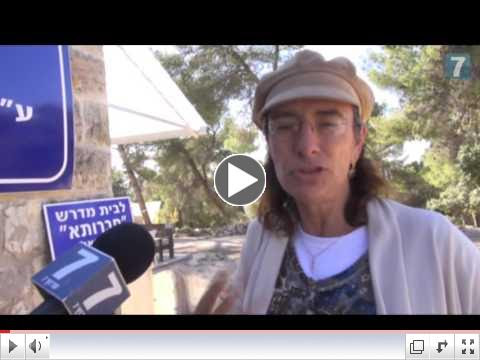 ‘Voting against settlements is actually voting against Judaism’
Nadia Matar of the Women in Green organization spoke to Arutz Sheva on Monday, saying she believes U.S. President-elect Donald Trump will “make a lot of changes for the better, for America, for Israel, [and] for the world.”
Israel should have applied sovereignty over all the areas it liberated in the 1967 Six Day War immediately after the war, she opined.
“This is our God given Biblical heartland. We just celebrated Hanukkah. There was a Jewish kingdom here in 145 BCE, way before Islam was invented, before Christianity was invented. There was a Jewish kingdom in the heart of Judea,” said Matar, “and yet in 2017 we hear that we have no connection to this land.”
“When somebody at the UN, or [Secretary of State] Kerry, or [President Barack] Obama, tries to tell us that we have no connection to our homeland, it is not only a vote against the ‘settlements’. It is really an attempt to disconnect the Jewish people from its homeland, the land of Israel,” she stated. “And because the connection between the Jewish people and its homeland is a center pillar of Judaism, basically those who try to disconnect us are basically voting against Judaism.”
In order to be connected to the land of Israel, the State of Israel should apply sovereignty over Judea and Samaria and the two-state solution “cannot and will never happen,” said Matar.
“Just as the people of America would not create a state of Al-Qaeda in New York, so will we not create a terrorist state in our midst because this is our land,” she added.
After eight years of standing firm in the face of President Obama, said Matar, it’s time to for everyone to come together in order to give Prime Minister Binyamin Netanyahu the strength to apply sovereignty over Judea and Samaria.
Founded in 1993 in response to the Oslo Accords, the Women in Green movement advocates Israeli sovereignty over all of Judea and Samaria, and works to raise awareness on illegal construction by Palestinian Authority residents on state land