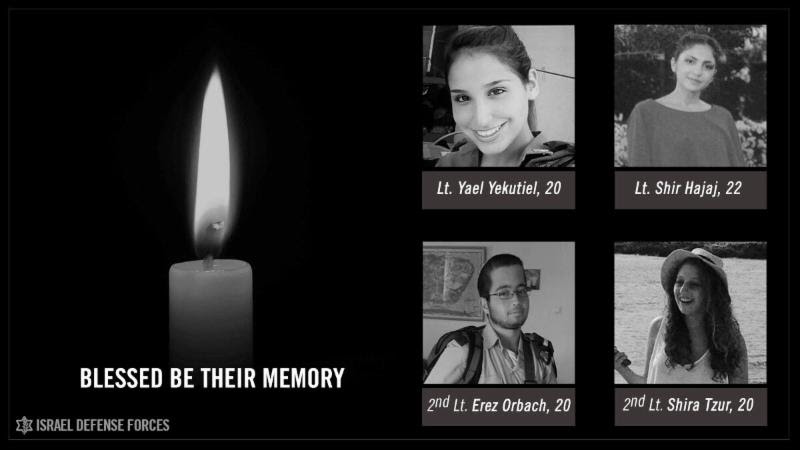 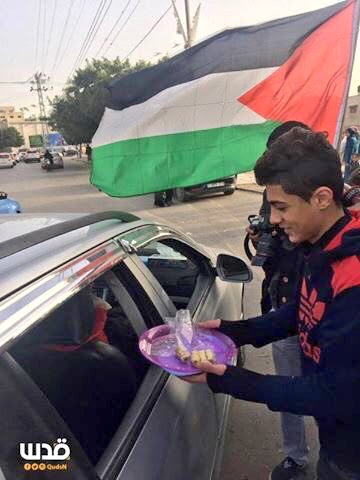 Celebrating the murder of four Israelis by handing out candy
The terrorist has been identified as Fadi al-Kanabir, a released prisoner from Jabel Mukaber, a neighborhood in eastern Jerusalem that borders East Talpiot.
Moshe Feiglin addresses the issue of Arab terrorism in simple, but accurate terms: A major reason that Arabs try to kill Jews is because they believe that their efforts will cause Israel to give away her land. This is true because Israel hasn’t yet declared sovereignty over all her land.
In October of last year, Mordechai Kedar wrote an insightful piece in Arutz Sheva, in which he asks, Why the Arab terror in Jerusalem? Why is there active Arab terror in Jerusalem and almost none in other Israeli cities with large Arab populations? His conclusion is similar to Feiglin’s, and he addresses the actions of Israelis, western nations and American Jews, who are proponents of ceding land and dividing Jerusalem. He states, “Hope, not despair, is the reason for Islamic-Arab terror in Jerusalem.” His analysis is worth reading as the world pressures Israel to make ridiculous concessions, and Israel continues to be on the receiving end of so much terror. It can be read here:
Why the Arab terror in Jerusalem?
The US House Of Representative’s Resolution Objects To UN SC Resolution 2334, But Has Flaws
The US House of Representatives passed a resolution on January 5 objecting to the recently passed UN Security Council Resolution 2334, as an obstacle to Israeli-Palestinian peace (342-80 with 4 voting present).
AFSI applauds the House for passing this resolution, and thank all its cosponsors. However, we have major concerns with the resolution as currently written, as unfortunately, it includes four separate calls for a Palestinian state:
…the United States has long supported a…two-state solution…
…Whereas since 1993, the United States has facilitated…a two-state solution…
…Now, therefore, be it Resolved, That-
(1) it is the sense of the House of Representatives that-
…a durable and sustainable peace agreement between Israel and the Palestinians will come only through…a demilitarized Palestinian state…
(2) the House of Representatives…calls for United Nations Security Council Resolution 2334 to be…altered so that-
…(B) it allows all final status issues toward a two-state solution to be resolved
The full text of the resolution can be read here: Text: H.Res.11 – 115th Congress (2017-2018)
Although the sentiment of the House resolution is pro-Israel, a truly pro-Israel document should call for security and peace, not a “Palestinian” state!
Please thank your Representatives for sponsoring and passing this resolution. However, remind them that a “two-state solution” is a danger to Israel’s security and survival, and would strip her of land in Judea and Samaria that is the cradle of Jewish civilization, and vital for her well-being.
Your Congressmen can be reached via the US Capitol switchboard: 202-224-3121.

The French “Peace” Conference Is Only Days Away

The upcoming “peace” conference in Paris on January 15 will be attended by dozens of countries. It is expected that these countries will call for a “two-state solution” between Israel and the “Palestinians”, thus demanding from Israel vital concessions that would strip Israel of eastern Jerusalem and land in Judea and Samaria, i.e., Israel’s heartland and cradle of Jewish civilization.
A draft document has already been drawn up that stress the centrality of this “two-state solution”, and Israeli PM Netanyahu has (so far unsuccessfully) called for the conference to be canceled. He has also stated that Israel is making efforts to prevent a final document approved at the conference to be used as the basis for another UN Security Council resolution, just days before Donald Trump is sworn in as the next US president.
Haaretz newspaper has obtained a copy of the draft document. Although it is behind a pay wall and accessible to subscribers only, the blog Israpundit has published it in full and it can be read here: Paris Peace Summit to Urge Netanyahu, Abbas: Disavow Officials Who Oppose Two-state Solution
The article concludes:
Despite Netanyahu’s opposition, the French did not cancel the conference and continued to advance their initiative. After Kerry confirmed that he would attend the conference – which is taking place five days before U.S. President-elect Donald Trump’s inauguration – the French invited the foreign ministers of no less than 70 countries, along with representatives of international organizations. UN Security Council Resolution 2334 gave the gathering an additional boost.
Netanyahu fears that the final communiqué of the Paris conference will be adopted next Monday by the EU foreign ministers’ council and the foreign ministers of the Quartet, and might also be the basis for another resolution at the Security Council, which is scheduled to convene next Tuesday for its monthly debate on the Israeli-Palestinian issue.
“We find ourselves only a few days before the Paris conference and, only a few days later, a Security Council debate,” Netanyahu said at the start of the weekly cabinet meeting on Sunday. “We are making a great effort to prevent another Security Council resolution.”
THURSDAY, JANUARY 12, 12:30 PM
Protest the January 15 Paris “Peace” Conference
Protest the UN’s anti-Israel bias
Join us Thursday, January 12 at 12:30 PM as we stand UNited with Israel! Stand with us at the French Mission to the UN to send a strong message prior to the Mid-East Summit in Paris being held January 15th — we will NOT allow the UN and her gang of Israel haters to target Israel unjustifiably.
NO MORE anti-Israel documents or resolutions!
The UN’s attempt to revise and erase Jewish history is deplorable.
We call on the UN to focus on REAL issues such as
Syrian Genocide and Global Islamic Terror
instead of vilifying Israel unjustly.
PLEASE SHARE WIDELY.
#ShameOnTheUN 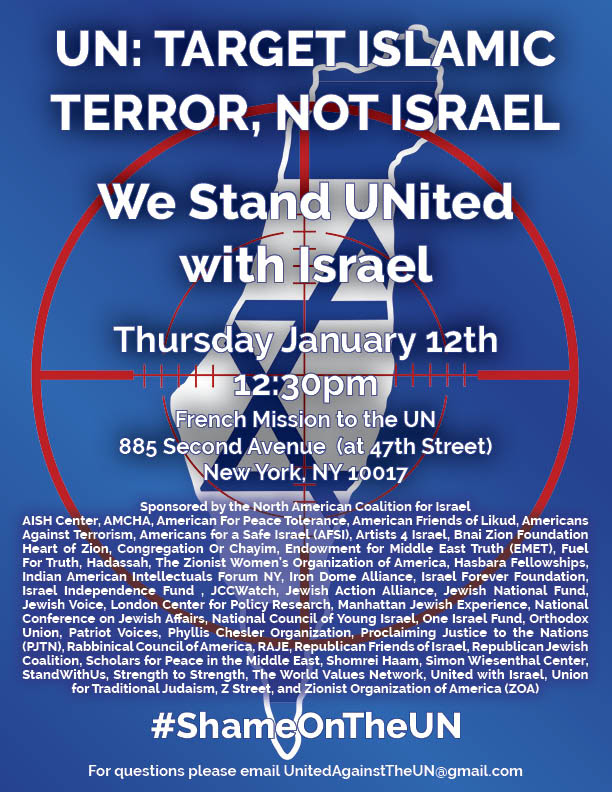