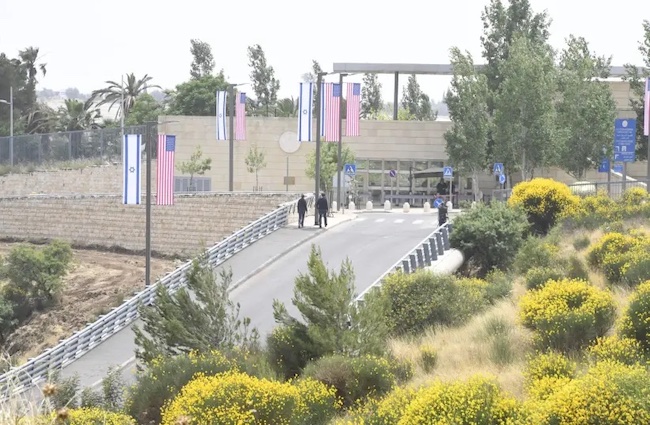 US Deputy Secretary of State for Management and Resources Brian Patrick McKeon has confirmed that the US needs Israel’s approval in order to open a consulate on Jerusalem’s very central Agron Street. The sole purpose of opening this consulate would be to service Palestinian Authority Arabs.

In a tweet, the American Israel Public Affairs Committee (AIPAC) wrote: “Important question from Senator Hagerty: Does Israel have to agree before the US could open or reopen a consulate to the Palestinians in Jerusalem?”

Responding to a tweet by another organization asking if Israel needs to agree to a reopening Deputy Secretary McKeon responded: “That’s my understanding—that we’d need to get the consent of the host government to open any diplomatic facility.”

Meir Deutsch, Director General of Regavim, said, “We have been warning for a decade already that the Palestinians are creating a de facto state disconnected from the State of Israel. Wherever they open a consulate will be the capital of the Palestinian state (This consulate would, unlike others in most countries, report directly to the US State Department and not to the US Embassy thereby making it a de facto embassy – ed) It would be very worthwhile for the State of Israel to wake up and put a stop to this.”

US OFFICIALS MUST IMMEDIATELY ABANDON ALL EFFORTS TO OPEN AN ILLEGAL AND ILLEGITIMATE CONSULATE FOR THE PALESTINIANS IN ISRAEL’S ETERNAL CAPITAL OF JERUSALEM. CONTINUE TO TO PUT THE PRESSURE ON WASHINGTON! TELL THEM NO PA CONSULATE IN JERUSALEM. CLICK HERE TO SIGN THE PETITION.