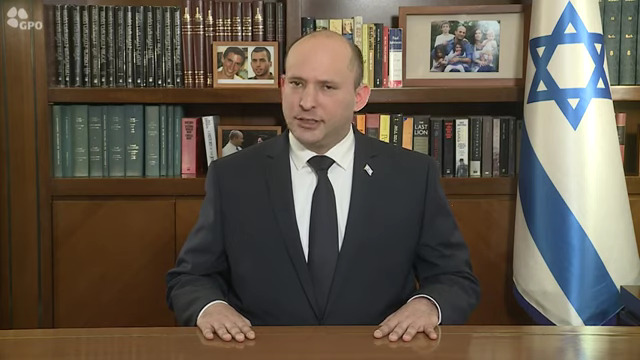 On the backdrop of the talks in Vienna that begin today, Prime Minister Naftali Bennett has issued the following message:

Today, Iran will be arriving at negotiations in Vienna with a clear goal: To end sanctions in exchange for almost nothing. Iran won’t just keep its nuclear program; from today, they’ll be getting paid for it.
Iran doesn’t hide its intentions. Just a couple of days ago, the senior command of Iran’s Armed Forces declared, and I quote, “We will not back off from the annihilation of Israel, not even one millimeter.”

Just this week, the Iranian regime shot its own people on the streets of Isfahan for having dared to protest the lack of water in their country. Yes, they shot their own citizens just for being thirsty. Such a murderous regime should not be rewarded.

Despite Iran’s violations and undermining of the nuclear inspections, Iran will be arriving at the negotiation table in Vienna, and there are those who think they deserve to have their sanctions removed and hundreds of billions of dollars poured right into their rotten regime.

They’re wrong. Iran deserves no rewards, no bargain deals and no sanctions relief in return for their brutality. We call upon our allies around the world: Do not give in to Iran’s nuclear blackmail.

AFSI gives credit where it is due. Here Prime Minister Bennett deserves our approval for his consistently strong stance against allowing Iran to obtain nuclear weapons.

Source:
‘Iran deserves no rewards’ – Bennett’s message to the world: A murderous regime like Iran should not be rewarded, by Arutz Sheva Staff, November 29, 2021