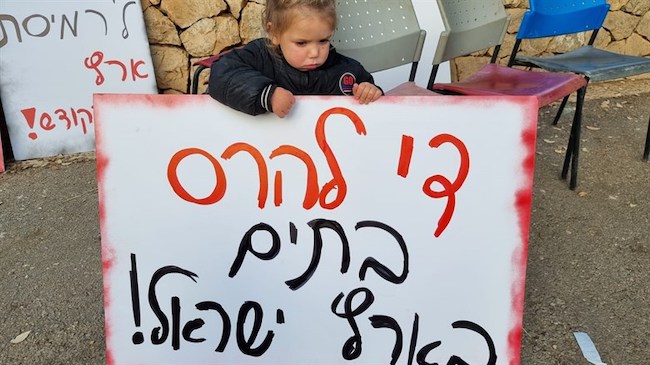 Today we must share three separate stories that we find quite disturbing. Frankly, we are ashamed. Never did we expect to see the Israeli government pitting Jew against Jew.

Last Wednesday, hundreds of police and Civil Administration inspectors raided the Givat Zion and Ramat Migron communities in the Benjamin region and began demolishing the homes of four families who had been attempting to rebuild after their homes were demolished for the first time last week.

The families claimed that they were forcibly evicted from their homes within minutes and without being given any notice or time to get organized. Residents who documented the destruction were also removed from the scene.

Elisha Yarad, a resident of Ramat Migron, told Arutz Sheva: “For the second time in a week, hundreds of policemen came to us on the hill with tools of destruction in order to destroy our house. They did not give us two minutes to get organized and took us out violently. In five minutes all our clothes, our daughter’s belongings were rolled outside and they destroyed our house. They came with venom and a desire to destroy the hilltop community to the end.”

In another report, a series of serious stone-throwing incidents have been recorded in recent days in the Samaria area near the village of Luban a-Sharqiya, at a road junction where many Jews travel to and from work. This is also one of the main focal points for attacks on Jewish owned vehicles. In one attack, last week, two cinderblocks were thrown at a pregnant passenger in her ninth month. Miraculously that attack ended with damage to the vehicle alone.

It was only logical, then, to find out on Sunday morning, on Reshet Bet radio, that the IDF will intensify its forces to eradicate hate crimes, as the defense establishment intends to establish special operations teams to carry out this effort. However, the target of this move appears to be primarily Jewish “settlers” who are accused of attacking PA Arabs. A senior military officer told Kan 11 News that “not enough has been done, the phenomenon needs to be put to an end. The whole system needs to act to eradicate nationalist crime.” Again, by nationalist, he means Jews.

Last is a report that came out on Kan News on Sunday that residents in Yitzhar have uncovered an undercover agent of the Shabak’s ‘Jewish department’. The agent had apparently been embedded in a yeshiva in central Israel before moving to Yitzhar. He first gathered information about the yeshiva’s students and rabbis as well as the mood of the yeshiva, before being moved to Yitzhar, where he collected information about minors who were allegedly part of the ‘hilltop youth’ and was a key figure in violent incidents over the last few years.

During his work with the Shabak, the agent received hundreds of thousands of shekels in aggregate, as well as rewards for providing information about the violent events in which he participated. In recent days, as part of his disclosure, the agent admitted his activities to his friends at the yeshiva and among the ‘hilltop youth’, apologized, disengaged from his Shabak handlers and is currently working together with rabbis and key figures to correct what he did in various ways.

As AFSI has previously reported, the Bennett coalition continues to appease the Arabs in too many ways while Jews in Judea and Samaria are ignored at best. What makes the actions of Bennett’s government deeply concerning is that Jews are not just being ignored, they are now demonized by their own people – the government and those with whom the government holds sway. That is unacceptable. If these instances are an indication of where the Bennett government is headed, we pray the Israeli people find the strength to demand that Bennett reverse course.

Hilltop homes destroyed: ‘They gave us no warning or time’, by Hezki Baruch/Arutz Sheva, November 24, 2021