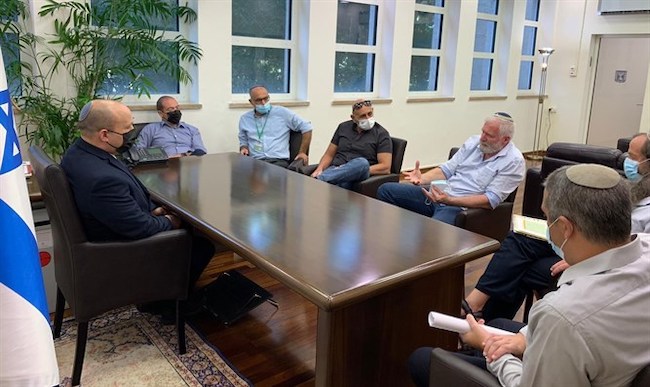 Prime Minister Naftali Bennett met today with the heads of the Yesha Council.

The meeting dealt with issues related to the development of the communities in Judea and Samaria and the strengthening of local authorities in the area. It was agreed to continue working together to advance the issues.

This is the first official meeting between Bennett and the leaders of the Jewish communities in Judea and Samaria since the inauguration of the new government. Bennett promised that construction in Judea and Samaria would not stop but would continue at the same pace as in recent years. “I am committed to the settlements,” the prime minister clarified. “There will be no construction freeze, but there will also be no annexation.”

That Bennett is committed to the continuity of new construction in Judea and Samaria
(which was proceeding at a trickle) is something. However, to fail to apply Sovereignty avoids the truth about Israel’s legal rights to the land. Similarly, we are still shaking our heads at Defense Minister Benny Gantz’s meeting last week with Palestinian Authority chairman Mahmoud Abbas and his subsequent agreement to lend the PA NIS 500 million – UNCONDITIONALLY. Who is Bennett’s priority when it comes to ensuring a safe and secure Israel – Jews or Arabs? He can’t have it both ways.

Source:
Bennett: I told the Americans we would not stop building, by Arutz Sheva Staff, September 9 2021