Two weeks ago in a rare public move, Kuwaiti writer Abdullah Al-Hadlaq, urged Arab recognition of the State of Israel as a legitimate, “independent sovereign state,” and Israelis as a people with a right to their land.

Al-Hadlaq stated, “Like it or not, Israel is an independent sovereign state. Most peace-loving and democratic nations recognize it. The group of states that do not recognize Israel are the countries of tyranny and oppression.”

This comes on the heels of mounting reports showing covert (and not so covert) cooperation between Israel and Saudi Arabia, as they face their common threat, Iran.

Whether or not this cooperation between Israel and Saudi Arabia (and other Arab states) is short-term – useful to both sides as long as necessary to stand up to Iran – or is long-lasting, remains to be seen.

So, as hopeful as these reports are, we won’t hold our breath while Israel and its enemy Arab states make common cause against today’s common enemy. After all, the enemy of my enemy may still be my enemy. 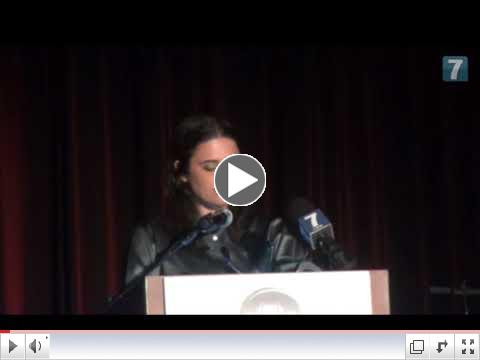 Last Thursday, the Florida branch of American Friends of Meir Medical Center hosted a dinner in support of the hospital.

Jeanine Piro, of Lebanese Christian descent, was the dinner’s Master of Ceremonies, and among the many distinguished speakers were Ido Aharoni, former Consul General of Israel in NY and Lior Haiat, the current Israeli Consul General to Florida, Alabama, Mississippi and Puerto Rico.

AFSI’s CEO Mark Langfan and his father William, philanthropists and strong supporters of Israel for many years, were honorees at this festive dinner. AFSI’s Co-Executive Directors Helen Freedman and Judy Kadish joined the Langfans in their celebration.

Meir Medical Center with its more than 700 beds, is the central medical center of the Sharon and Shomron area, serving a population of approximately 800,000 residents. A number of large cities in this area include: Ramat Hasharon, Hod Hasharon, Kfar Saba, Herzliya, Ra’anana, and Netanya, as well as a number of communities in the Shomron. The facility is located in Kfar Saba, not far from Tel Aviv.

AFSI’s latest Chizuk Mission recently concluded. This mission, like previous ones, was memorable, educational, intense and enjoyable, and provided Chizuk to both Israelis and mission-goers alike. From the beleaguered yet stalwart Jewish community in Hebron, to the brave citizens of Israel living just a few feet away from Gaza, AFSI was there.

Click HERE to read the full report of this year’s Fall Chizuk Mission.

WE ARE PLEASED TO NOTE!
Reservations are now being taken for AFSI’s next Chizuk Mission, April 17-25, 2018. Reserve your space for this special time in Israeli history when the 70 years since the creation of the State will be celebrated. All are invited to join us. Contact Judy at 212-828-2424 or write to judy@afsi.org.

The December 2017 edition of AFSI’s much-acclaimed monthly periodical, The Outpost is now available online. Please click HERE to read it and to access other editions in our extensive archive.
December 2017 Outpost Table of Contents
Open post 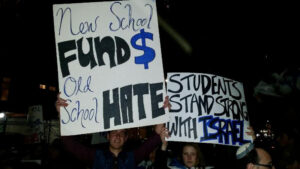 A spirited group of pro-Israel advocates turned out Tuesday evening in front of The New School for Social Research in NYC to protest the presence of Linda Sarsour, who headlined an event there AntiSemitism and the Struggle for Justice.

A write-up of the evening can be read here:
Linda Sarsour highlights her anti-Zionism at anti-Semitism event

On November 29, 1947, the United Nations voted in favor of Resolution 181, to partition the remaining territorial area that was part of the British Mandate known as Palestine, into two states: one Jewish, one Arab. Of course, the Jews accepted the idea of a shrunken, truncated state with Jerusalem under international jurisdiction, and the Arabs rejected it. This led to Israel’s War of Independence and the re-establishment of the state of Israel in 1948. The rest, as they say, is history.

What many people do not know, or conveniently neglect to mention, is that the British Mandate for Palestine, which was earmarked for Jewish settlement and to become the Jewish state, originally included the land that today is the state of Jordan. In 1921, after the Balfour Declaration and the San Remo conference confirmed international, political and legal rights to the founding of a Jewish state in Palestine, the British tried to placate the Arabs by giving them part of the land that was included under the Palestine Mandate. This land comprised 77% of the original Mandate, and was used to create the state of Transjordan, to be renamed Jordan in 1949.

Over the years there have been numerous proposals to establish an Arab state west of the Jordan River, including by Israeli governments, all rejected by the Arabs. And the Arabs, especially the “Palestinian” Arabs, have not given up their dream to destroy Israel and create the apartheid state of Palestine, from the river to the sea in its place.

So, do we celebrate the passing of Resolution 181 in November 1947? We certainly commemorate it, as perhaps as the saying goes, half a loaf is better than no loaf at all.

The good news today, however, is that Jews – the true indigenous people in the Land of Israel – are returning to their historic homeland, Judea and Samaria, even in the face of obstacles placed by the international community and Israeli governments. May this return continue unabated and may full sovereignty be restored throughout the Land of Israel, to its rightful owners.

Yesterday (November 29) the Israeli government destroyed the Aharonowitz family’s carpentry shop in Netiv HaAvot. This was the opening volley for the additional destruction of a number of homes, slated to take place in a few months. Whether or not these homes can be saved is still an open question, but for now, the least we can do is to emphasize the senselessness behind the destruction already wreaked.
Volunteers to rebuild demolished carpentry shop in Netiv Ha’avot

Remember, there is only one way –
Jewish Sovereignty over all of Judea and Samaria!

AFSI is proud to sponsor the video below,
It’s Time for Sovereignty. 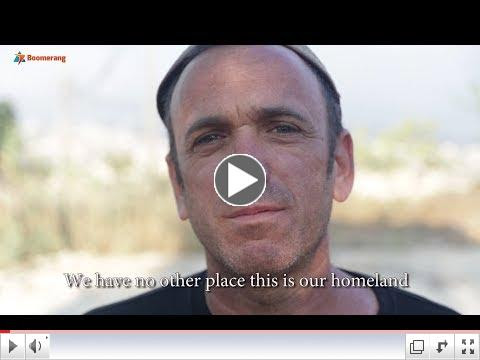 Linda Sarsour, Jewish Voice for Peace (JVP) and Jews for Racial & Economic Justice (JFREJ) are headlining an event at The New School for Social Research called – AntiSemitism and the Struggle for Justice.

These anti-Semitic, anti-Zionist individuals and organizations cannot be ignored! Their lies must be exposed!

In 2016 the Israeli High Court ruled that 15 out of 42 homes in the Netiv Avot neighborhood in the Elazar community in Gush Etzion were illegally built on “private Palestinian land,” and a March 2018 date was set for their demolition by the state.

In an additional bizarre ruling, the court ruled that an “illegally built” carpentry shop in Netiv Avot (really just a shack) would be demolished before the end of this year. A number of the shop owner’s friends – army reservists – have written to PM Netanyahu promising to rebuild the shop if the government goes forward with its destruction.

At a rally held last night to show support for the 15 families in Netiv Avot, Jewish Home Party Minister Naftali Bennett said that there is no reason the homes should be torn down. He told The Land of Israel Network’s Josh Hasten that destroying those homes “makes no sense,” and he is calling on Prime Minister Benjamin Netanyahu to do what he can to save those houses. Last night’s rally saw hundreds in attendance including Government Ministers, Members of Knesset, and many other Israelis who do not want to see the unnecessary demolition of the Jewish homes in Netiv Avot.

You can hear Josh Hasten’s report from the rally, including Naftali Bennett’s remarks, on the Land of Israel Network, by clicking HERE.

For additional background information on Netiv Avot, including the absurdity of the court’s decision, please read Josh’s report in the Jerusalem Post here: DON’T DESTROY THE NETIV AVOT HOMES.