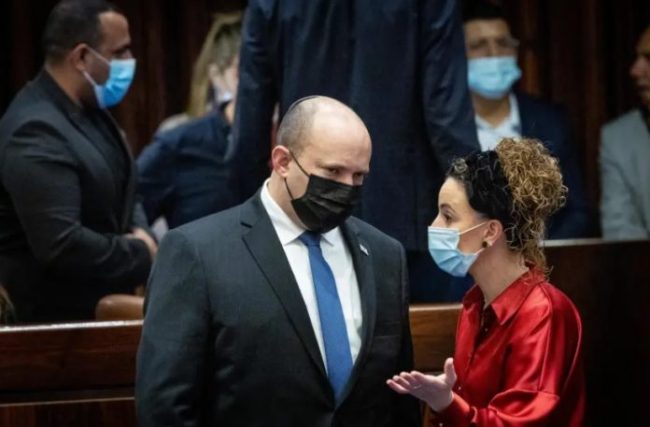 Right-wing lawmakers lauded former coalition whip, Idit Silman (Yamina) Wednesday morning, after her Tuesday night announcement of plans to resign from the Bennett government and push for the formation of a new coalition.

Opposition Leader and former Prime Minister Benjamin Netanyahu said in a video statement, “I was excited to hear the news of Idit Silman’s decision, and I bless you in the name of many people in Israel who waited for this moment.”

According to reports, she is set to join Likud in the opposition, giving the Likud party two main potential paths to return to power. The first option would be for it to pass a law to dissolve the Knesset and this would require the support of at least 61 of the 120 members of Knesset. Recent polls done by Channel 14, Israel’s version of Fox News, show that in an election, the right wing would get 62 seats and Yamina would not pass the threshold. We hope this kind of news encourages more defections from the Yamina party, which has right wing origins.

Israel cannot afford another bout of governmental paralysis with the Israeli people paying the price. From our viewpoint a collapse of the government at some point was inevitable. Prime Minister Naftali Bennett’s tenure has been deeply troubled from the start with his flip-flop on campaign promises. He appeased the Islamist Arabs in his coalition, ignored the pressing needs of Jews in Judea and Samaria (i.e., increased construction, electricity via the national grid) and has done nothing to apply Sovereignty there. He’s dragged his feet on actions that could bolster Israel’s safety and security throughout the country and preserve its Jewish Zionist identity. With all the damage he and his coalition have done, we pray the outcome restores to Israel all that has been ignored, undermined and threatened under Bennett’s leadership. We are watching closely for developments.