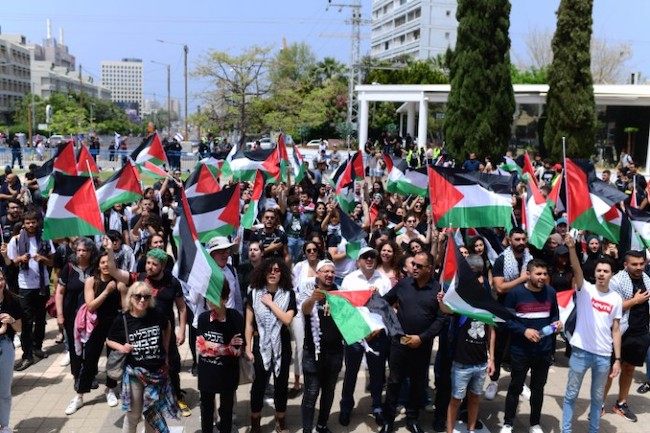 On Monday, for the first time, the Knesset Education Committee chaired by MK Sharren Haskel (New Hope) debated freedom of expression, incitement to terrorism, and violence on Israel’s campuses. She said: “When students turn to this committee and say they are afraid to enter the campus, and they ask to study on Zoom, fearing for their safety, something here is not working.”

During the illegal Nakba demonstration of Arab students on the grounds of state universities (May 15, 2022 photo above), Jewish students who protested this malevolent expression of hate toward Zionism were attacked physically, with scant police intervention. This is but a small sample of what Jewish students on campus contend with.

“Since Operation Guardian of the Walls, we are seeing a distinct upturn in incitement against Jewish students. Unfortunately, the educational institutions are not offering a clear way to prevent these phenomena.” ~Im Tirtzu’s National Coordinator Shai Rosengarten

MK Galit Distel Atbaryan (Likud) said she doesn’t blame the Arab students who hurt Jews on campus “…but the lecturer who called waving the national flag a sickness.”

To make matters worse, many Israelis are outraged over the recent decision by Open University staff to give more weight to the Palestinian narrative in courses on Israel Studies. Such a narrative has the potential to be in direct conflict with the positive view of the state’s history and culture taught in the Israel Studies track.

A Jewish student should not be afraid to go to classes. Educational institutions should be a place of learning and discovery with a healthy exchange of ideas and respectful debate. Rage, hatred, false claims and propaganda against Israel should not be given a forum of any kind. Each person teaching, rather, spewing this vitriol, has a sickness within and it’s time they figured out why they need to channel so much hatred toward Israel – for many, a place they call home. The real lesson they need to learn is that their sickness incites Arabs to commit more terrorism against Israel.

Matan Peleg of Im Tirtzu summed it up best, “It simply cannot be that Israeli academia will pave the way for the elimination of the State of Israel from within.”