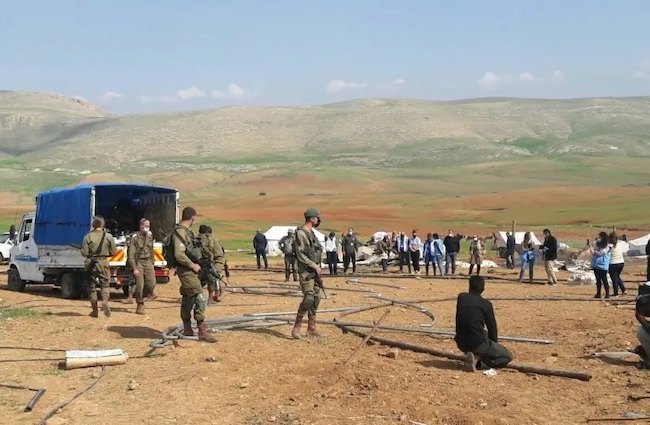 The United Nations has called for international support in favor of the Palestinians who again attempted to steal Jewish owned land. The UN call came after the IDF this week prevented Palestinians from erecting new tents at the site of the demolished illegal herding village of Khirbat Humsa in the Jordan Valley.

“The support of the broader international community is critical, to ensure the Israeli authorities guarantee humanitarian access to provide assistance to people in need,” the UN Office for the Coordination of Humanitarian Affairs (OCHA) in the Palestinian territories said Wednesday in an appeal it put out for the community of around 100 people.

The community is located in an IDF firing zone, in a remote location, off a dirt road. The Civil Administration demolished its tents in November. When the families erected the tent village a second time, the IDF returned in February, moving tents during five different demolition incidents, after residents continued to rebuild.

Professor Hillel Frisch’s BESA Center Executive Summary states, The Palestinian Authority’s decade-long plan to take control of the West Bank’s Area C is being implemented successfully. This is a historic game-changer in the 100-year-old conflict that requires an immediate and massive Israeli response.

Is what we’ve reported here Fact or Fiction? What’s the truth about what’s really going on in Area C? Could Israel really be losing the battle for land that is legally hers?

Join AFSI this coming Sunday to learn the truth about The Big Lie Of Khirbet Humsa. Naomi Kahn of REGAVIM in Israel will give us the inside story with fact not fiction. You don’t want to miss this! Be sure to register on ZOOM!!