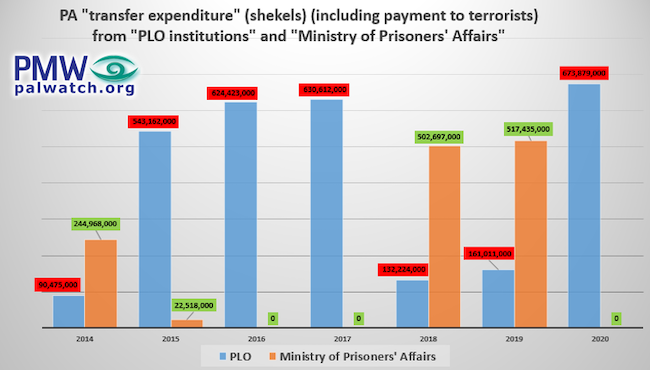 Since the beginning of 2020, the Palestinian Authority (PA) has been trying to hide the financial record of its payments to the Palestinian terrorist prisoners and released terrorists (together hereinafter “the terrorist prisoners”). In 2018 and 2019, the PA monthly budget performance reports clearly listed the transfer expenditures of the “Ministry of Prisoners’ Affairs,” which was primarily the payments to terrorist prisoners, as 502 and 517 million shekels respectively. In 2020, the budget category of the “Ministry of Prisoners’ Affairs” (later by the PA called the Commission for Detainees’ Affairs) was removed altogether. However, throughout 2020, numerous statements by PA and PLO officials confirmed that the PA continued to pay hundreds of millions of shekels a year in terror rewards. Consequently, it was clear that the PA had decided to pay terrorists in a roundabout way so that there would be no reference to the salaries at all in their budget.

Palestinian Media Watch has examined the PA’s financial reports throughout 2020 and can now report both where the payments are being hidden, and that the amount the PA spent on terrorists salaries in 2020 was no less than 512 million shekels.

Source:
How much did PA spend on terror salaries in 2020?, by Maurice Hirsch, Itamar Marcus, and Nan Jacques Zilberdik. Palestinian Media Watch, February 22, 2021