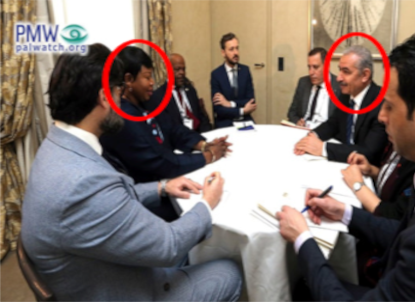 Whereas the United States has made statements promising renewed financial support to the Palestinian Authority, the PA is ineligible for US funding. According to US law to be eligible for funding from the Economic Support Fund (ESF), the PA must not “initiate” or “actively support” any International Criminal Court investigation “that subjects Israeli nationals to an investigation for alleged crimes against Palestinians.”

Palestinian Media Watch’s (PMW) recent report reveals that the Head of the PA Attorney’s Office for International Legal Cooperation Jamil Sajadiyeh admitted that the PA, ignoring the above US condition, is very actively supporting investigations against Israelis at the ICC:

“Around 80 meetings have been held between Palestine and the ICC, of course with the office of [ICC] General Prosecutor [Fatou Bensouda]. There are nearly 60 cases and letters that have been submitted, all of them telling about the Israeli violations. Monthly reports are being submitted to the ICC via the general prosecutor through the [PA] Ministry of Foreign Affairs.” [Official PA TV, Palestine This Morning, May 25, 2021]

United States law is very clear. The Consolidated Appropriations Act, 2014 passed in January 2014 prohibited Economic Support Fund (ESF) aid if the PA “initiate an International Criminal Court judicially authorized investigation, or actively support such an investigation, that subjects Israeli nationals to an investigation for alleged crimes against Palestinians.” The same provision has been adopted every year since, most recently as part of the Consolidated Appropriations Act, 2021, passed in December 2020.

According to PMW, there is no doubt that the PA initiated the ICC investigation against Israel. Does this surprise you? It doesn’t surprise AFSI. The fact that Fatou Bensouda turned a deaf ear to the Consolidated Appropriations Act and allowed the PA to go forth in blatant violation of it is a breach of her duties. It’s also pure anti-Semitism. We don’t need to go any further to find an explanation for her disgusting and politically biased actions.

Source:
The PA met 80 times with the ICC – mocking and violating conditions for US funding, by Itamar Marcus/Palestinian Media Watch, May 31, 2021