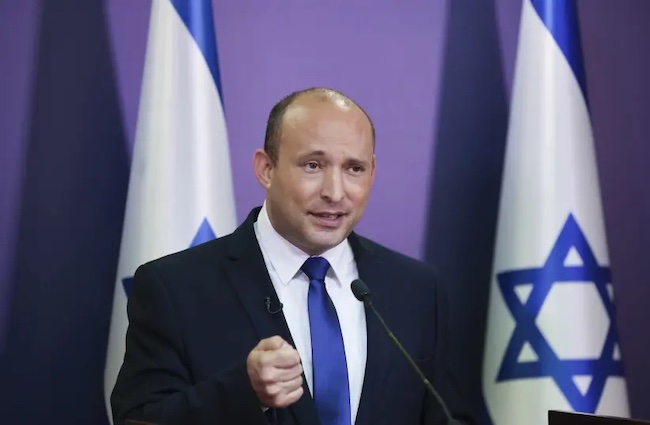 Yamina leader Naftali Bennett delivered his long-awaited announcement on Sunday that he would join a government with Yesh Atid leader Yair Lapid. Bennett seeks to replace Prime Minister Benjamin Netanyahu, who he accused of leading Israel to national suicide for his own personal reasons.

Yesh Atid and Yamina began negotiations immediately following the announcement on Sunday night in an effort to reach an agreement by Wednesday’s deadline. If formed, Lapid and Bennett have agreed that Bennett will serve first as prime minister until September 2023, and Lapid will take over until the term ends in November 2025.

Likud has been trying its best to torpedo the move of this dangerous formation. Just this morning, Likud sent a letter to the president, the president’s legal counsels and the Knesset asking not to approve the move. Their reasoning is that as long as Lapid does not present the president with the exact composition of the government portfolios and additional details about it, nothing should be approved.

Likud demands that the president make it clear to Lapid that if he does not present the full details of his proposed government by midnight on Wednesday, the mandate would pass to the Knesset for 21 days. If at the end of the three weeks during which the mandate is in the Knesset and its members fail to form a government, Israel would go to the polls in accordance with the law and the president would have no discretion on the issue.

It should also be understood that Likud wrote the two legal counsels: “You are also asked to clarify to MK Yair Lapid that according to the Basic Law: Government, a Knesset member who is assigned to form a government cannot be an alternative prime minister but must head the government in its first term.” The argument has already been rejected.

Important to keep in mind is that during Ra’am chief Mansour Abbas’ recent meeting with Ayelet Shaked, Abbas demanded that one of his party’s lawmakers be appointed deputy interior minister. Shaked, who reports have indicated will be interior minister if the government if formed, was said to express fierce opposition to the demand. Any demands by the Arab faction are troubling for Israel.

The ever astute Caroline Glick, conveys a clear list of the problems a Unity government presents. “The leftist government that Bennett and Shaked are about to form will not be able to oppose Biden’s policies because most of its cabinet ministers support those policies. And this spells the demise of the Abraham Accords. The rationale for those peace deals is Arab faith in Israel’s willingness to confront Iran even in defiance of the US. Once that is gone, the Abraham Accords will be dead in the water.

The leftist government that Bennett and Shaked are now forming will guarantee that the Palestinian Authority will complete its seizure of Area C, endangering Israel’s strategic interests and imperiling its communities in Judea and Samaria. Most of the members of the government object to any steps to secure Israel’s rights and strategic interests in the areas. Not only are they themselves ideologically committed to undermining Israel’s rights in Judea and Samaria. They will never dare to defy the Biden administration, which supports Palestinian land theft.”

There are MKs in Yamina who are still hesitant about joining the formation of what has the potential to be a dangerous left-wing government. They see it as radical, weak and a threat to Israel’s security. The Israeli people have been through enough but is settling for this type of government what they should tolerate? We agree! However, Israel is a Sovereign nation. We in the diaspora,have to wait and see how this plays out and pray for a government that guarantees Sovereignty and security.

Sources:
Bennett announces plan to form gov’t with Lapid that will oust Netanyahu, by Gil Hoffman/Jerusalem Post, May 30, 2021

The strategic consequences of Bennett’s megalomania, by Caroline Glick/Israel Hayom, May 30, 2021