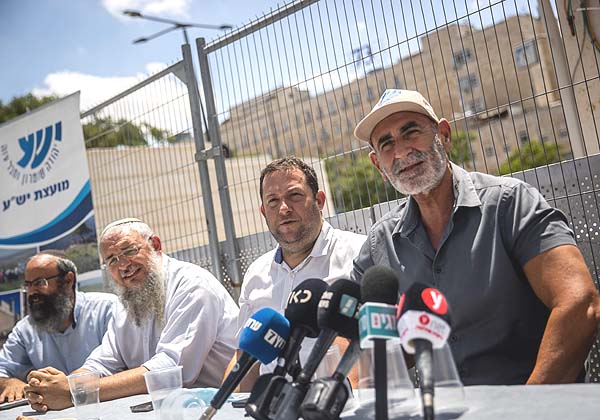 The Subcommittee on Objections in the Supreme Planning Council in the Civil Administration will convene next week, after an eight-month lull. It will debate—in coordination with the Biden administration—the approval of construction plans in various planning stages of a little more than 2,000 Jewish housing units in Judea and Samaria. This figure is at least 2,000 units shorter than the original plan, and it coincides with the Defense Ministry’s approval of 1,000 building permits for PA Arabs residing in Area C which is under full Israeli control.

The committee meeting, which was originally supposed to discuss the approval of construction plans for more than 4,000 housing units for Jews in Judea and Samaria, is only taking place because of pressure from the Yesha Council on Prime Minister Naftali Bennett. The settlers’ leadership has been demanding to set a date for the discussion, following the agreement between former Prime Minister Benjamin Netanyahu and former President Donald Trump approving the issuing of building permits in Judea and Samaria every quarter.

It turns out that this period of eight months during which the Subcommittee on Objections has not been convened parallels perfectly the time that passed since President Joe Biden’s inauguration. The subcommittee last met in January and approved only 792 housing units. Since then, thousands of housing units in various planning stages have accumulated in Yesha, and they’re awaiting approval. So in recent weeks, PM Bennett’s office has been working with the White House to receive our American allies’ approval to convene the committee. Many, including AFSI membership, are perplexed at the need for this approval to build.

Apparently, receiving Washington’s approval for what goes on in Israeli construction five minutes from Kfar Sabba required two gestures on the Lapid-Bennett-Gantz government’s part: first, let 1,000 Arab homes bloom on Israeli soil; and second, cut down the Jewish homes from more than 4,000 to about 2,000.

Yesha Council held an emergency meeting Thursday, following which they released this statement: “We are in an unacceptable situation whereby plans that were approved by Defense Minister Benny Gantz have been rejected by Prime Minister Naftali Bennett. We oppose this unprecedented move to cut down construction plans in Judea, Samaria, and the Jordan Valley, even though they are ready for approval. It’s inconceivable that plans that have been frozen on the committee’s desk for eight months will not be approved. This sets back the settlement enterprise for many years to come. We cannot continue to sit and wait.”

Mayor of Efrat, Oded Revivi says the Yesha Council’s frustration and condemnation of the construction work in both Jewish and Palestinian parts of Area C are the results of a narrow view. In a Jerusalem Post Opinion piece he states: Their view fails to recognize Israel’s triumph that a (Democratic) American administration did not condemn the decision of the Israeli government to build in Judea and Samaria, and most probably, secretly helped to draft it. This is the recognition and validation that we have been waiting for – even this less sympathetic administration understands that we are here to stay.

Obviously, this is bad for Israel and good for the PA Arabs. It gives the PA a lawful way to build up and take over land in an area where Israel has full legal control. We are beyond troubled by the move Prime Minister Naftali Bennett is making. Appeasing the Arabs and leaving Jews in Judea and Samaria in a bad position is not in the best interest of defending and securing Israel.

A bird’s-eye view of the settlement enterprise after Area C announcement, by Oded Revivi/Jerusalem Post, August 12, 2021