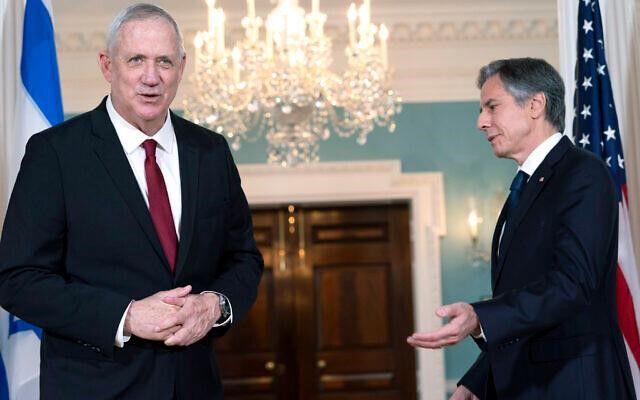 An Israeli defense official on Saturday disputed American claims that the United States was not informed of a highly contentious decision by Jerusalem to label six Palestinian rights organizations as terror groups. Israel insists Washington had been told in advance.

“Officials in the American administration were updated in advance of the intention to make this declaration and they received intelligence information about the matter,” the defense official said, speaking on condition of anonymity.

On Friday afternoon, Defense Minister Benny Gantz announced that half a dozen Palestinian civil society groups — including highly prominent ones with significant backing and oversight from the European Union and other international bodies — were being designated as terror organizations, asserting that they worked on behalf of the Popular Front for the Liberation of Palestine (PFLP) terror group.

“Those organizations were active under the cover of civil society organizations, but in practice belong and constitute an arm of the [PFLP] leadership, the main activity of which is the liberation of Palestine and destruction of Israel,” Gantz’s office said in a statement. According to the Defense Ministry, all six organizations employed senior PFLP members, “including activists involved in terror activity.”

These six NGO’s have also previously been exposed by Regavim and The International Legal Forum, are among the many NGOs that have been after these “humanitarians” for years. For too many years now they have been actively working to destroy and harm Israel. AFSI applauds Minister of Defense Gantz for this much needed move in labeling and banning these “humanitarian” groups for exactly what they are: Terrorists.